When it comes to the issue of bride price in Eastern Nigeria, many people are deformed about how things are done there. 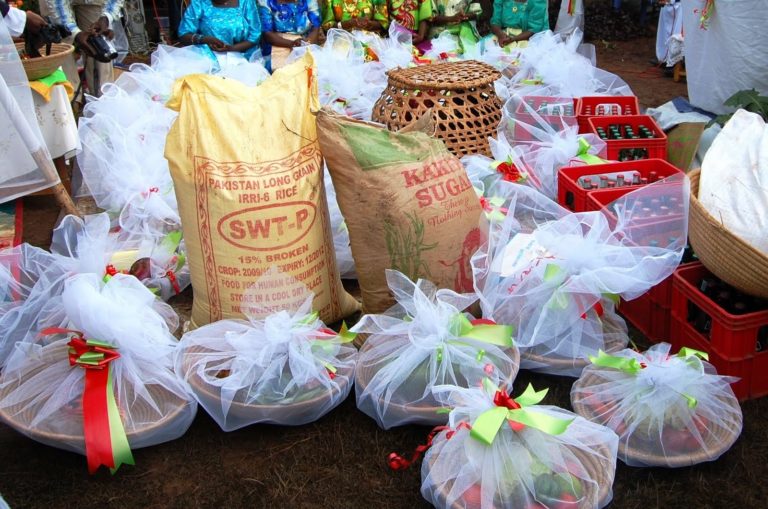 Bride price list
Planning to marry an Igbo lady, then forget everything they told you that you can’t afford to marry an Igbo lady because most of these things are lies.
In actual truth, the Igbo traditional engagement list for marriage is not as overwhelming as people usually paint it.
If your fiancée says ‘yes’ to your marriage proposal, then the next thing is to forward your marriage proposal to her family, through the parents.
In Igbo customs, at first, this initial marriage proposal/introductory rite is known as “Iku aka” (which means knock on the door).
You’ll first, have to go alone to her parents after, which you will take your family to see her bigger family. If you are lucky to have received a positive response from the lady’s family, the in-laws-to-be will give the man and his family a list of the next steps to enable them to prepare for the customary Igbo traditional marriage ceremony.
A groom-to-be is expected to ask and receive the consent and blessings of the bride-to-be’s parents as well as her extended family. Once they all give their consents, the groom can then proceed to complete the rest of the traditional marriage rites, which includes, the bride’s price (Ime ego) with a presentation of the engagement list, and the formal traditional party (Igba-nkwu).
The list includes the gift of Umu-ada, they need to buy pieces of clothes (wrappers), shoes and bags and jewellery, etcetera.
Another item on the list is the gift for (Umunna), which includes kolanuts, palm wine, bottles of Schnapps, carton of assorted drinks (malt, soft drinks and beers) and goat. Also on the list is the general gift (Nmepe uzo), which includes bags of rice, bags of salt, palm oil, kerosene, stockfish, tubers of yam etcetera.
Intending grooms should please note that the Igbo bride price and engagement list consists of gift items that are shared among different groups among the bride’s family and the extended family which is made up of (the Umunna, the Umuade, the youths etcetera). They are not only for the bride parents.
Interestingly, in recent times, many Igbo parents have had to do a downward review of the cost of the traditional marriage ceremony to help their future in-laws. Unconfirmed sources also have it that such decision is also intended to allow their daughters get married early as most suitors are reported to flee the relationship once they get the list.
Consequently, Igbo parents do this review in exchange for an intending groom to make a commitment to take good care of their daughter and her future children and this has given rise to more marriages among Igbo ladies and their suitors.
Culled from TheNation
Top Stories