Following the embarrassing incident 2face Idibia suffered in the hands of Tacha yesterday, her team has responded. 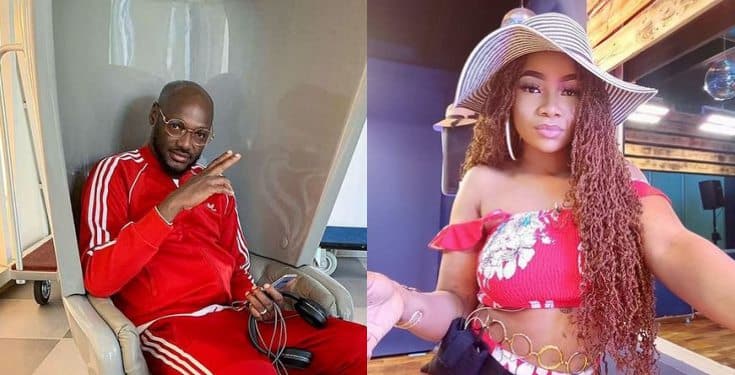 2face and Tacha
BBnaija housemate, Tacha's management has released a statement over trending claims that the housemate snubbed 2baba’s handshake during his 44th birthday celebration in the big brother house.
In the video, 2Baba could be seen trying to shake Tacha’s hand, but the housemate ignored the hand.
Nigerians have been lashing out at Tacha since the video surfaced.
In their response, her management has explained what happened in the video, saying:
“Normally we would wait to address this Tomorrow as we’d already said our good nights but this cannot wait another second. This video is making rounds on social media and it is being said that NATACHA “snubbed and ignored” @official2baba during his birthday visit to the house”.
DISCLAIMER please.
“Tacha was very excited to have the guests in the house and did not stop showing it. She was all smiles and bubbly with everyone till the very end of the party.
We’re aware Tunde has a huge dislike for Tacha over nothing and we’re honestly not bothered by it. What we wouldn’t allow him have his way with his hate trend is making a LIE trend.
At the point of this handshake, Big Brother called the housemates and most of them felt he was going to put them on freeze so THEY ALL rushed to get a comfortable space to settle and at the point, the legend stretched out his hands to her and she being in a hurry DID NOT SEE nor NOTICE it and that is all.
She later greeted 2baba with a huge smile and kept positive energy till the party was over. Tacha would NOT ignore nor snub Tuface for any reason.
During her introduction, she even said, “she’s too happy to finally meet him in reality.”
SHE HAS HUGE RESPECT for him and would NEVER let that change.
If you must hate, please do so with honesty and NOT lies. Stop using LIES to paint a narrative that suits you cause you have the audience as this is VERY unfair and unacceptable.
To every other person helping in trending this video with that false narrative, search your minds and do have a pleasant night rest.
Top Stories