In the majority judgment, the tribunal held that the petitioners failed to prove the allegation of substantial non-compliance to the electoral act in the conduct of the election. 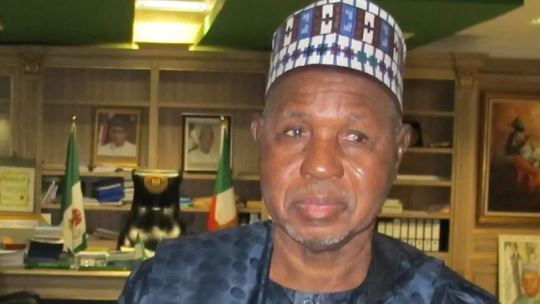 Governor Aminu Bello Masari
The Katsina State Governorship Election Petition Tribunal on Saturday affirmed the election of Aminu Bello Masari as the validly elected Governor of Katsina state.
The Tribunal, which sat in Abuja in a split decision of two to one, also dismissed the petition filed by Senator Yakubu Lado and his party, the Peoples Democratic Party (PDP), wherein they challenged Masari’s victory in the March 2019 governorship election held in the state.
In the majority judgment, the tribunal held that the petitioners failed to prove the allegation of substantial non-compliance to the electoral act in the conduct of the election.
According to the tribunal, Governor Masari was qualified to contest for election for the office of the Executive Governor of Katsina state, adding that, the name Aminu Bello Masari is the same with Aminu Masari.
It further stated that there is no law that stipulates the number of names to be used in the filling of the Independent National Electoral Commission’s form for an election.
However, the chairman of the tribunal, Justice Hadiza Alijos, in a dissenting judgement allowed the petition and ordered that a fresh election be conducted in the state within 90 days.
The chairman was absent, but her dissenting judgment was delivered by Justice A. B Omotoso a member of the panel.
She held that Masari was not qualified to contest the election because the name, Aminu Masari is different from Aminu Bello Masari.
Lado and his party, filed their petition challenging Masari’s reelection in March, 2019 and hearing commenced in May.
The matter was highly contentious, forcing a change in the sitting venue of the state governorship election petition tribunal from Katsina state to Abuja.
Senator Lado and his party had, in their petition prayed the tribunal to upturn the declaration of governor Aminu Masari of the All Progressive Party (APC).
Among the grounds raised by the petitioners is that governor Masari falsified his age and academic qualifications in his credentials and affidavit submitted in his INEC nomination form.
The petitioners also argued that the governor was not qualified to stand for election.
But the tribunal laid to rest all the controversies over the weekend as it resolved the matter in favour of governor Masari.
On non-qualification, the tribunal held that the petitioners did not prove their case and the allegation made without proof can be denied.
The tribunal further held that evidence of witnesses called by the petitioners from one to 50 is of no probative value since they confirmed that they gave their statements in Hausa language and the Hausa versions are not before the tribunal.
Lado had alleged that governor Masari’s documentation with INEC which was tendered as exhibit to the tribunal showed that Masari and his father are 69 years old respectively.
He alleged that an affidavit said to have been deposed to by Governor Masari’s father, Umaru Bello showed that while his son was given birth to on 29th May, 1950 which translates to 69 years in 2019, he (the father) was 51 years as at the time of the declaration on 9th August, 2001 which suggests that he is exactly 69 years in 2019, same age with his son.
Another issue raised by Senator Lado before the tribunal was the alleged inconsistent dates of birth as shown on the primary school leaving certificate of Governor Masari which differs with that of the sworn declaration of age.
He said, while the declaration of age showed that Masari was born in 1950, the primary certificate showed that he was born in 1951.
Similarly, Senator Lado claimed that the same primary certificate in question belongs to one Aminu Bello; a Fulani by tribe while the respondent is known and addressed as Aminu Bello Masari, Hausa by tribe.
In the same vein, Lado questioned a post-graduate diploma presented to INEC by Governor Masari, noting that the certificate bears no logo or stamp of the institution, hence questionable.
But, in the majority decision of the tribunal yesterday, it held that the petitioners failed to prove the allegations as required by law and consequently dismissed their petition and affirmed the election of Governor Masari.
Top Stories