Aaron Ramsey Scores On His Serie A Debut For Juventus


Wales midfielder Aaron Ramsey scored on his Serie A debut as champions Juventus came from behind to defeat Verona. 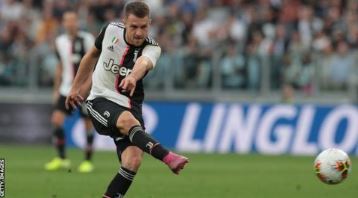 Aaron Ramsey
Ramsey, 28, made his first appearance as an 86th-minute substitute in the Champions League on Wednesday and saw his long-range shot deflected into the corner 31 minutes into his full debut.
Verona had taken a 20th-minute lead courtesy of Miguel Veloso's spectacular volley from outside the box.
But Cristiano Ronaldo completed the turnaround with a second-half penalty.
Returning veteran goalkeeper Gianluigi Buffon produced an excellent save late on to secure the three points - the 41-year-old making his second debut for the hosts against the side against whom he played his previous Juventus game in May 2018.
Marash Kumbulla received a red card deep into injury time - Verona's third in four matches - as he brought down Blaise Matuidi, but Ronaldo's resulting free-kick struck the wall.
After the Italian champions disappointingly threw away a two-goal lead against Atletico Madrid on Wednesday, Veloso's early goal-of-the-season contender stunned the Turin crowd.
Moments before taking a surprise lead, a spirited Verona had missed a penalty after Merih Demiral brought down Samuel Di Carmine. Di Carmine struck the post from the spot-kick, before Darko Lazovic fired the rebound off the bar.
A fortunate deflection ensured a dream debut goal for Ramsey, who moved to Turin in the summer after his Arsenal deal expired, and just four minutes after the restart Ronaldo converted from the spot following Koray Gunter's clumsy challenge on Juan Cuadrado.
Ramsey received a warm reception as he was withdrawn by Maurizio Sarri on the hour mark - having becoming the first Welshman to score for Juventus since Ian Rush in 1988.
Top Stories