The officer said that Lagos State being the economic hub of the country, had been attracting people from across the country. 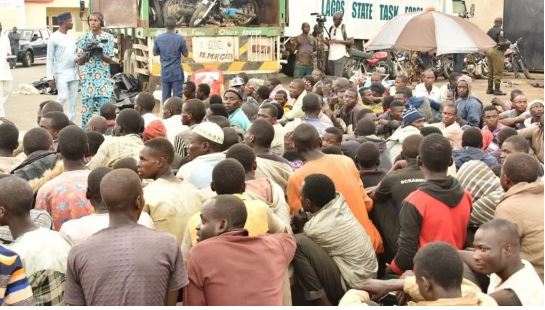 File Photo
The Lagos State Task Force on Sunday said it had impounded 4,500 motorcycles (okada) from riders, who had defaulted the states traffic law.
It added that the task force was awaiting the directives of Gov. Sanwo-Olu of Lagos State on whether to destroy them or not.
The Head, Public Affairs Unit of the agency, Mr Taofik Adebayo, who disclosed this to the News Agency of Nigeria (NAN) in Lagos, also confirmed that some northerners who recently migrated to Lagos in a trailer have been freed.
“We have no less than 4,500 impounded bikes awaiting to be crushed but at present, we are awaiting the Lagos State Government’s directives with the ones we have now.
“We are not relenting and we will continue to impound motorcycles that default as we come by them,” he said.
The officer said that Lagos State being the economic hub of the country, had been attracting people from across the country.
Adebayo noted that this forced them to migrate to Lagos and take to the motorcycle transportation which they considered as one of the easiest businesses for them.
“Earlier in the month, we intercepted no fewer than 44 people with their bikes in an articulated vehicle coming from the northern part of the country into Lagos.
He added that the task force had to release them because they had proper identification.
“However, there are so many illegal motorcyclists that had slipped our inspection and scrutiny into the metropolitan city through routes that are used to smuggle goods.
“This tells you that bikes still come into the state in their hundreds in spite of arrests made by law enforcement agencies.
”The influx of these displaced people is what is bringing an increase in the ‘okada’ business in Lagos,” he said.
Adebayo said that the laws regarding motorcycle riding in the state were not punitive in nature but corrective in order to reduce the high incidence of accidents related to motorcycle riding.
“The government did not totally ban okada but instead, restricted their activities to the inner streets of the city with a code of conduct to follow while operating within the specified streets.
“For instance, a rider is not supposed to ride without a helmet, the rider must be above 18 years, the rider must not carry anybody less than 12 years old, the rider cannot carry a woman that has a baby strapped to her back and cannot carry a pregnant woman.
“These are the laws that guide the operations of ‘okada’ riders in the state in order to reduce ‘okada’ related accidents.
“We usually carry out the raids at the early hours of the day or very late at night to catch unsuspecting hoodlums when they are at their most vulnerable state.
“During such period, there is no room to start screening and separating the innocent from the guilty but afterwards, the screening takes place and those with valid forms of identification are set free,” he said.
Top Stories