Ondo Police Speaks On Death Of Over Thirty Cows


The hill, according to reports, is a sacred place where the king of the community performs some rituals annually. 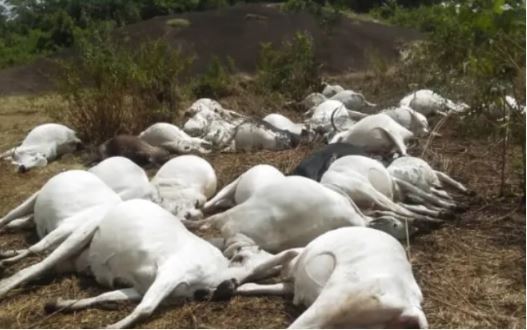 Some of the affected cows
The Ondo State Police Command has described the 'sudden death' of over thirty cattle in the state as "natural disaster".
The police also debunked reports making the rounds that they may have been poisoned by rural farmers.
A strange thunder caused apprehension at Ijare community in Ifedore Local Government Area of the state after striking the cows to death.
Some herdsmen were said to have climbed to the top of Oke-Owa hill in the community to graze their cows when lightning struck the herds to death.
The hill, according to reports, is a sacred place where the king of the community performs some rituals annually.
An online newspaper quoted sources in the community as saying the incident was the wrath of their gods on the herdsmen.
The source quoted the sources as saying that the gods were angry because herdsmen desecrated the sacred land.
The herdsmen were said to have been warned against grazing on the sacred mountain by the community’s chiefs, but that they were adamant.
Reacting, High Chief Wemimo Olaniran, the Sapetu of Ijare kingdom, said the incident was not strange to the community.
Olaniran said similar events had happened to people who desecrated the sacred mountain in the past.
But the spokesperson of the State Police Command, SP Femi Joseph, in a short text message, described the incident as a natural disaster.
Top Stories