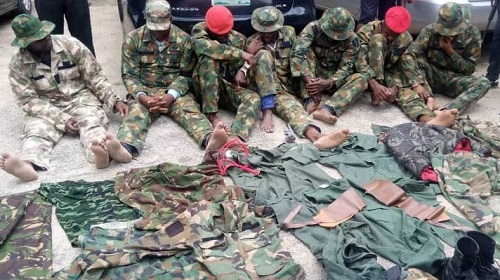 The Lagos Police command has arrested seven men around the Ijegun area of the city, whom it alleged specialise in robbing people in military uniforms.

The police said the men were arrested after they (the police) received multiple distress calls from residents of Ijegun.

The Lagos State Commissioner of Police, Zubairu Muazu, told journalists in Lagos on Monday that the men robbed a man of his Lexus RX330 car on February 18. He said the man was traveling from Ibadan to Ijegun when he was robbed.

The police claimed it recovered 12 pairs of military camouflage uniforms and military ID cards from the suspects. 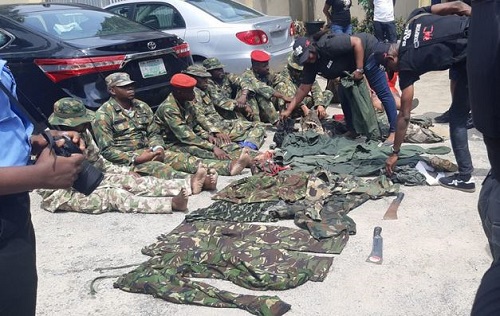 Mr Oluchukwu was dismissed in 2015 after he was declared AWOL. “I took a pass in 2015 and went home but I felt sick when I got home, it took some time and I was dismissed.”

He claimed he has been working as an escort for commuter buses since his dismissal where he earns N3, 500 per day.

When asked how he came in possession of army uniforms he said it was given to him by a commander.

The police claimed the suspects confessed to be responsible for series of robberies within Ijegun and its environs.

He further said that 19 firearms and 51 rounds of live ammunition were recovered from the suspects. He also added that 31 robbery attempts were also foiled by the police.
Top Stories