A Nigerian man has been nabbed in India by security operatives for selling cocaine. 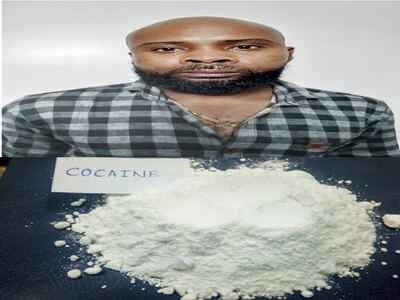 The suspect
The City Crime Branch of Bengaluru, CCB has arrested a 34-year-old Nigerian man and seized 20gm of cocaine from him.
The accused identified as Ekene Okonkwo alias Charlie, a resident of Hennur Bande, Bangalore, was nabbed after police received a tip-off on his activities.
According to BangaloreMirror, the police conducted a raid on his house and seized the cocaine. Police said the accused had also violated visa regulations and overstayed in the city.
According to the police, he would roam around in the city to reach out to more people  if released. He would also sell drugs only to customers known to him.
A case has been registered in Hennur police station.
Top Stories

Nigerian, One Other Arrested In India For Drug Trafficking