Sowore Spends Night In Jail Despite Fulfiling His Bail Conditions


Omoyele Sowore has ended up spending one more night in jail even after fulfilling his bail conditions. 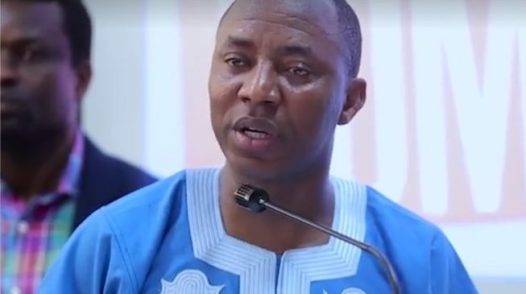 Omoyele Sowore
The Nigerian government is yet to release the detained publisher of Sahara Reporters, Omoyele Sowore, despite receiving an affidavit of compliance to the court order directing his release on Wednesday morning.

Marshal Abubakar, a lawyer with the Chambers of Mr Sowore’s lead counsel, Femi Falana told PREMIUM TIMES on Wednesday night that they left the office of Nigeria’s State Security Service at 10.30 p.m. on Wednesday without Mr Sowore.

This was despite the court order which had instructed an immediate release of the respondent.

PREMIUM TIMES reported how Mr Sowore’s lawyers submitted documents indicating full compliance to the order for Mr Sowore’s release at the SSS office where it was received by an official, Ayuba Adam, at 10.08 a.m on Wednesday.

Following the account of Mr Abubakar who deposed to the affidavit of the compliance, Mr Sowore’s lawyers left the SSS office over 12 hours after fulfilling their end of the September 24 decision of the court, without the SSS doing the same.

Mr Abubakar said the SSS officials asked them to return on Thursday to “discuss with the SSS DG,” Yusuf Bichi.

The Federal High Court on Tuesday had ordered the immediate release of Mr Sowore who was arrested on August 3 for planning a revolutionary protest, the #RevolutionNow.

The protest was held in parts of the country amidst clampdown of the protesters by security forces.

On September 20, the government filed seven count charges against Mr Sowore accusing him of alleged treasonable felony, fraud and cyberstalking among others.

After withdrawing an application for Mr Sowore’s bail on Tuesday, the prosecution lawyer, G. A. Agbadua, asked the court to determine whether “in the interest of national security,” Mr Sowore should be granted freedom or not.

The Nigerian government under President Muhammadu Buhari had been condemned for its treatment of Mr Sowore and its disregard to court orders by many, including Nobel Laureate Wole Soyinka.

Mr Soyinka had reacted to reports about Mr Sowore’s charges, saying the Buhari administration had “reached an unprecedented level of paranoia” .

Several orders for the release of a former National Security Adviser, Samba Dasuki, who was arrested in 2015 have not been complied with.
The Chief Justice of Nigeria, Ibrahim Tanko, recently said he will not tolerate disregard for court judgments.
***
Source: PREMIUM TIMES
Top Stories