A Psychiatrist has explained why mental disorders and suicide rates are higher among health workers. 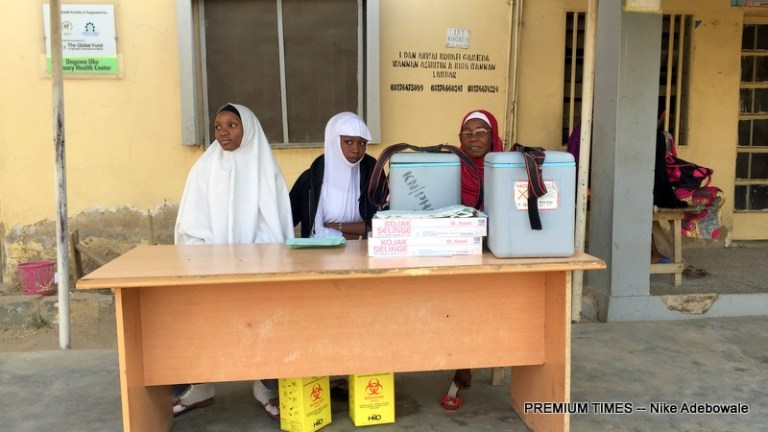 Some health workers waiting for parents to bring out their kids for vaccination
and a town crier reminding them of the importance of taking the vaccine (Photo taken by Nike Adebowale)
A Psychiatrist, Oluyomi Esan, says mental disorders and suicide rate are higher among medical practitioners than in any other profession.

Mr Esan of the Department of Psychiatry, University of Ibadan, made the assertion on Wednesday at a public lecture organised by the Medical and Dental Consultants’ Association of Nigeria (MDCAN), University College Hospital (UCH) Chapter, Ibadan.

The News Agency of Nigeria (NAN) reports that the lecture was tagged: “Mental Health and Health Workers”.

It was organised as part of the activities to mark the Annual General Meeting and Scientific Conference of the MDCAN-UCH Chapter.

Mr Esan said some mental health problems in the healthcare professionals were often as a result of work-related stress and problems associated with long working hours.

He said signs of mental disorders in doctors include: medical errors, decreased performance and productivity, and negative impact on patients’ health.

According to him, common psychiatric disorders in medical practitioners include: burnout, depression, anxiety disorders and suicidal thoughts.

“A recent survey of over 600 health workers revealed that 85 per cent have experienced mental health issues including stress, anxiety, low self-esteem and depression.

“A 2016 Report of the Journal of American Medical Association (JAMA) revealed that globally, 27 per cent of medical students are depressed, while 12 per cent have experienced suicidal thoughts at one point in time.

“The global prevalence rate of depression among doctors is up to 43.2 per cent,” he said.

Mr Esan, also quoting the report, said about 28 to 40 in a hundred thousand doctors commit suicides, adding “it is higher than the 12.3 per 100,000 in the general population’’.

According to him, depression affects an estimated 12 per cent and 19. 5 per cent of male and female doctors respectively.

“Doctors have better physical health, but poorer mental health than other professionals.

“Medical career structure is an important source of stress.
“A recent large survey of doctors in Britain shows that many doctors of all ages and gender regret ever becoming doctors.

“The Jackson Healthcare 2013 Physician Outlook and Practice Trends revealed that up to 59 per cent of doctors would not recommend a career in medicine to their children,” he said.

NAN also reports that the American Psychiatric Association stated at its 2018 Annual Meeting that one doctor commits suicide in the United States of America everyday.

The psychiatrist said high patient demand, staff shortages, poor and inadequate facilities and infrastructure were some of the factors that contributed to the higher rate of mental disorders among physicians.

“Our government’s current hardliner attitude to doctors have also contributed to a feeling of being underappreciated and our medical associations are not supportive.

“Two fifths of the doctors who killed themselves had been dependent on drugs and failed to seek help because of fear of stigma.

“Doctors’ obsessional traits and guilt and lack of personal control over their works have contributed to the feelings of inadequacies,” Mr Esan said.

He advised health workers to be proactive in seeking medical assistance and immediate treatment on mental health illness that might arise due to work load associated with the profession.

Mr Esan also urged the three tiers of government and other stakeholders, including the Medical and Dental Council of Nigeria (MDCN), to be proactive in providing the necessary and needed support for all physicians.

He said: “Such support must include provision of more mental health support for doctors from recruitment to retirement.

“Preventive strategies must also include flexible working hours and conditions; reduced hours of work; planned career breaks and being able to take time off when necessary.

“There is also a need to change in attitude because doctors who become ill merit as much vigilance and compassion from their colleagues as other patients.

“Doctors must also take responsibility for their personal health and wellbeing; let us build a life outside medicine and help one another as confidants by providing complete confidentiality when consulted by peers,” he said.

In his remarks, the MDCAN Chairman, Dare Olulana, said that health workers must take cognizance of mental health illnesses and seek treatment once diagnosed.

Mr Olulana pleaded with members of the society to support health workers in order to reduce the stress associated with their line of duty.

“A lot is expected of medical doctors, for example, you are expected to be above board all the time, you must be prompt in your service and you must deliver the service as expected.

“So, if you find yourself failing in these responsibilities, one way or the other, you will feel like a failure and star going through stages of psychiatric disorders.

“Ironically, many people in this part of the world tend to thinks that doctors and other health workers are excluded from mental health illnesses due to their profession, but this is wrong.

“We are also humans and doctors should begin to look out for each other and the society too must show support in order to reverse this trend of high rate of suicide among physicians,” he said.
Top Stories