In what will come across as a really shocking development, a man has been spotted on a power mast 'taking a nap'. 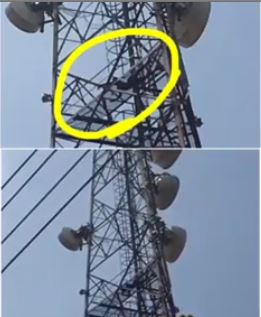 A video has emerged on social media showing the stunning moment a man was caught on camera lying at the top of a power mast.

Usually, people shy away from masts for fear of getting electrocuted by mistake, but this man is definitely not scared of being killed by electrocution. His action has left many people in shock.

In the video which has gone viral online, the unnamed man is seen lying down at a high point on the mast after climbing there in broad daylight.
Stunned residents are heard exclaiming on the ground after sighting the man on the mast.

According to reports the incident happened in a community in Ondo state. At the moment, it has not been confirmed why the man decided to do what he has done.