Guardiola tasted Champions League glory twice at Barcelona but failed to win it at Bayern Munich. 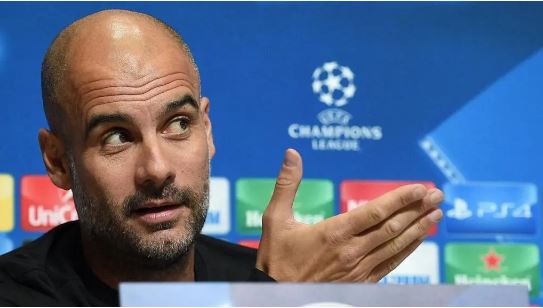 Pep Guardiola
Manchester City manager, Pep Guardiola, has said failure to win the Champions League this season, will not change anything.
According to him, he is not obsessed about adding to his two Champions League titles.
Guardiola tasted Champions League glory twice at Barcelona but failed to win it at Bayern Munich.
The Spaniard has also failed to deliver the trophy at City, despite winning two Premier League titles, two League Cups and one FA Cup.
“I want to win it but if I don’t, it will not change my life.
“I’m not going to kill myself.
“In my first press conference, it was the same question – you are here to win the Champions League.
“I spoke to Ferran [Soriano, City chief executive] and Khaldoon [Al Mubarak, chairman] and they didn’t tell me that.
“It’s impossible to arrive and do it without the feeling that we want to do it.
“We tried the first season, we tried the second season when we were up for four competitions.
“I would be happier, but it wouldn’t change anything in my private life,” Guardiola to the media, ahead of Tuesday’s clash against Dinamo Zagreb.
Top Stories