There was pandemonium at an orphanage recently after robbers invaded the home and stole a newborn baby. 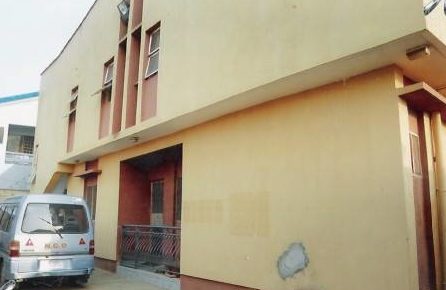 Orphanage where the incident took place
The recent invasion of an orphanage home in Lagos by some robbers to steal new born baby may have signalled that even the less privileged in the society may not be safe after all, according to a report by PM Express.
The men of the underworld stormed Little Angel Orphanage Home located at No. 17 Atoko Olusanya Street, Lanre Bus Stop, Igando area of Lagos, stole a six weeks old baby and escaped at night.
The theft, which reportedly happened in August, 2019, was reported to the Police, who commenced investigation to apprehend the bandits and recover the boy.
The investigation paid off recently as one of the suspects linked into the ugly incident, a 37-year old woman, Mary Williams, was arrested and transferred to the Gender Section of the Police Command for further investigation.
It was gathered that during investigation, the Police found Mary culpable and charged her before the Ogba Magistrates Court for conspiracy and stealing of the baby named Alex.
The other suspects were still at large while the Police were said to be making every efforts to arrest them.
The suspect, Mary, was charged before the Presiding Magistrate, Mr. P.E Nwaka, who ordered her to be remanded in prison custody.
The prosecutor, Mr. Christopher John, was said to have objected before the Court and demanded the remand of Mary in custody and to deny her bail in order not to jeopardize the Police investigation because other suspects were still at large.
When P.M.EXPRESS correspondent visited the orphanage home, the owner was not around to comment on the matter. However, sources confirmed the theft of the baby but unable to confirm if the Police have recovered the baby.
Top Stories