It was reported that armed policemen have been deployed to strategic places within Kano and its environs. 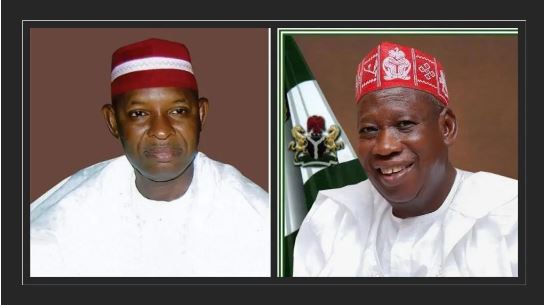 Abba Kabir-Yusuf and Governor Umar Ganduje
Security has been beefed up in Kano metropolis ahead of the Judgment to be delivered by the Kano State Governorship Election Petition Tribunal today.
Ruling will be given on the petition filed by the Peoples Democratic Party, PDP, and its gubernatorial candidate against Gov. Abdullahi Ganduje.
PDP and Abba Kabir-Yusuf are challenging the declaration of Dr Abdullahi Ganduje of the All Progressives, APC, as winner of the March 23, governorship election in Kano State.
NAN reports that armed policemen have been deployed to strategic places within Kano and its environs, including the Government House and other public buildings.
Policemen have also taken over the control of movement of vehicles, especially along the major streets in the city as early as 6.00 a.m as parts to check recklessly amongst motorists at the end of the judgment.
Other security personnel have also been put on red alert at the tribunal located along the Miller road at Bompai areas of the state capital and all motorists who have no business with the area were turned back.
People going toward the area where the tribunal is located have been subjected to serious thorough questioning and checks to enhance security at the venue.
Human and vehicular movements around the Bompai area was also restricted as only lawyers, journalists, and security personnel were allowed in or out of the place.
Top Stories

Update! Drunk Policeman Whose Rifle Was Seized By Residents In Viral Video Has Been Arrested
Popular Stories