A polytechnic graduate has been killed by flooding while controlling traffic in a Delta state community. 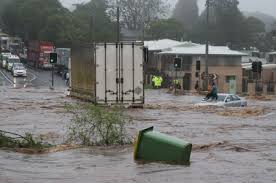 File photo
According to a report by Punch Metro, a middle age man fell into a manhole as rampaging flood swept him away into Anwai River in Asaba, the Delta State capital.

The polytechnic graduate identified as Chinedu Igboke was said to have been controlling traffic at the Akpo junction along Okpanam road on Monday evening when he mistakenly stepped into an uncovered drain and fell into the gutter.

The flooding, which was as a result of the torrential rain that pounded the capital city throughout the day, rendered many people homeless.

It was gathered that the deceased who was in his thirties, hailed from Ebonyi State, and was working as a security guard in a private school along Shekinah Love Assembly Street, off Ralph Uwechue Way, Okpanam Road, Asaba.

When our correspondent visited the scene of the incident on Wednesday, an eyewitness said the deceased was directing traffic which built up on Shekinah Love Assembly Street following the gridlock along Okpanam road, when he mis-stepped and fell into the uncovered gutter along the earth road.

The spot where he was said to have fallen was almost overgrown with weeds, as observed by our correspondent.

But the eyewitness said the gutter was filled with water when Igboke fell into it, adding that before help could come, he had already floated into the deep tunnel which channels storm water from the area into Anwai River.

The source said, “When he fell into the water, he slammed his head against the concrete walls of the gutter. So he might have lost strength to swim against the tide before being floated helplessly into the tunnel”

“The school authority where Igboke worked as a security guard, mobilised divers and swimmers to comb Anwai Rivers.

“We suspect that the body might be hanging somewhere along this tunnel because of blockade inside. We went with them to the river but they could not recover his body,” the source added.
Top Stories