10 Ways To Cope With An Angry Spouse


According to marriage counsellors and psychologists, there are effective ways to cope with a spouse prone to excessive anger. 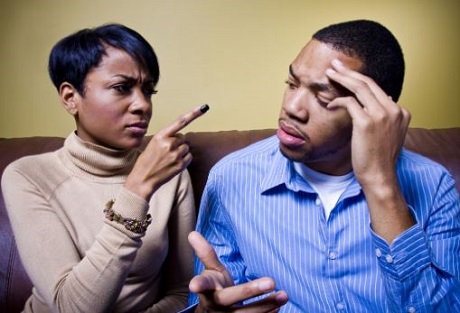 File photo: Fighting couple
For months, Kunle Olaiya (not real name) couldn’t forgive his wife. Their marriage has yet to clock two years. One evening in late 2018 after a disagreement, Olaiya’s wife picked a machete from the kitchen store, headed to the garage and smashed his car’s windscreen.

According to Olaiya, who lives in the Lekki area of Lagos, his offence was that he was having extramarital affairs with one of his female colleagues at work. His wife had accessed his phone and seen a series of photographs he took with the female colleague. She confronted him with the accusation of infidelity, which he snubbed. Olaiya, who manages an Information Technology firm, didn’t expect his wife’s next action. It was “unimaginable”, he said.

He told our correspondent, “It took a long time for me to forgive her, after many pleas by family and friends and church members. I was on the verge of divorcing her.

“I never thought that taking pictures with a female colleague could lead to the destruction of my property. I didn’t expect the reaction from my wife. I never knew she could be so angry. The incident has since changed my perception of her.”

Even though Olaiya said he had forgiven his wife, he said he had remained cautious ever since of who he takes pictures with, in addition to locking his phone with a passcode.

“One of the conditions to forgive her then was to fix my car, which she did. I thought she ought to learn her lesson,” he said.

Anger is one of the most powerful negative emotions. It can destroy relationships, whether between employers and employees; parents and children; and husbands and wives.

Sometimes, it is not discovered on time by intending couples and when it is discovered, it can be too late. It can be detrimental to the health of the relationship.

When a partner always displays excessive anger, it can drain the energy of the other spouse, leaving them frustrated. However, when a partner is able to deal skillfully with an angry partner, the relationship may transform dramatically and the couple may then become each other’s best friend.

According to marriage counsellors and psychologists, there are effective ways to cope with a spouse prone to excessive anger.

A marriage counsellor and psychologist of 40 years based in Chicago, United States, Dr Bernard Golden, said constructively responding to a partner’s anger could be a challenging task in even the most loving and secure relationships.

He said, “Anger arises from a perceived threat to a partner’s emotional or physical well-being – to their resources, including time, finances, space and possessions, and loved ones.

“So, whether real or not, such threats may undermine your partner’s experience of safety. And whether or not you believe the threat to be real or not is irrelevant to helping your partner diffuse their anger.”

He added, “Consequently, the overriding task to help defuse your partner’s anger is to engage in behaviours, verbal and non-verbal, that help them experience an increased sense of safety.

According to Golden and other psychologists, the following 10 strategies can help cope with an angry spouse.

(1) First, reduce your own anger arousal

Golden said, “Learning to effectively respond to, rather than react to, your anger enables you to clearly think about and identify those strategies that may be most constructive in calming your partner during this moment of conflict.

“Being able to manage your own anger may require that you learn strategies to do so, including exercises in body relaxation, mindfulness and meditation, as well as cognitive-therapy techniques and self-compassion skills.”

Suggest that you and your partner sit in the most comfortable couch or chairs in the room. Sitting, rather than standing, could help both of you to be more relaxed, Golden said.

Marriage counsellor, Pastor Paul Olukayode, advised partners to speak slowly and in low tones when their spouses are angry.

“Emotions are transmittable, so talking back to an angry spouse can lead to a dangerous moment. When a partner is calm, it will help to foster calmness during the anger moment.

“Speaking slowly and in a low tone draws attention to you and can further help to break the cycle of your partner’s escalating anger,” the Lagos-based cleric said.

Another psychologist and marriage counsellor in Lagos, Mrs Modupe Babalola, asked couples to be compassionate when their spouses display anger. She asked them to remember that anger was a reaction and distraction from experiencing some form of inner suffering.

She said, “It is a reaction and distraction to the visceral tension that accompanies both anger and the negative feelings that accompany it, namely feelings such as fear, powerlessness, anxiety, shame, betrayal and low self-esteem.

“You can tell your spouse who is angry statements such as, ‘I could tell you’re angry and I really can’t read your mind. Maybe you’re feeling ignored, hurt, or disappointed. Can we talk about that?’ When a reasonable spouse hears such a statement of compassion, they would calm down instantly or in the long run.”

According to Golden, anger requires energy. He said, “An angry partner may wind down between 10 and 15 minutes. Challenging or interrupting them when displaying anger may only lead to further escalation.”

He added, “Genuinely listen to what your angry partner is saying to better understand what they are experiencing.

“However, know your partner. Some individuals may only escalate during silence. If this occurs, you might need to speak compassionate words that could relieve them.”

(6) Partially agree with them

Finding common ground is an essential component of any successful negotiation, according to Olukayode. “Agreement enhances connection, promotes empathy and reduces the threat, hence it is the key element in fostering a feeling of safety,” he said.

Olukayode added, “Listen to your partner’s language to identify paths to an agreement. For instance, if your spouse says something like ‘you always’ or ‘you never do’ so-and-so, you could then respond with ‘yes, I agree, but sometimes I…’”

The cleric added that if your spouse accused you of being “stupid,” you could respond by saying, “‘I sometimes do stupid things.’ If you’re told, ‘You never remember what I say!’ you might say, ‘Yes, I can be forgetful at times.’”

(7) Admit your contribution to a situation

Golden said admitting your role in the conflict showed your willingness to have a candid discussion – one that does not involve defensiveness.

“Saying you’re sorry is another way of ‘owning’ your contribution. And doing so may be a powerful way to validate your partner’s experience,” he said.

(8) Don’t focus on the past during anger moment

In the heat of an argument, your partner may state, “You did the same thing last month and again last week!” In order to focus on the current situation, Golden suggested responding by saying, “‘I could tell you still have feelings about what happened then and we can discuss that. But right now, I can only handle one thing at a time. Could we discuss what just happened?’” Repeat this phrase if necessary.

“You may be confused and frustrated by your partner bringing up the past. However, this clearly indicates that they have not fully let go of feelings about those events. It’s important to follow through by discussing them at a later time.”

He said, “You might tell your spouse in an anger moment, ‘I could tell you’re angry and hurt and I’m open to discussing how you’re feeling. But I don’t deserve to be yelled or cursed at.’ “‘Or, you might state, ‘It’s me. Right now, I don’t believe anything that I say is going to be constructive.”

Practising self-compassion entails doing what is wise and in your best interest. Your safety should be a priority. Listen to your inner wisdom to determine if you need to leave and find help.

“You should know when to walk away in an anger moment and return when the atmosphere is calm,” Babalola suggested.

Meanwhile, the psychologists said the above strategies might not always work all the time, hence the need to learn a lot about one’s partner when the suggestions don’t work.

Golden said, “These strategies may fail when your partner tends to habitually cling to anger and ongoing hostility. At that point, you can ask them, ‘What is it I can say or do that can help you with your anger?’

“Through this approach, you’re encouraging them to identify what they need to calm themselves. And their answer may be informative and revealing. The most committed and loving couples may from time to time experience conflict and anger. Learning how to create safety to enhance further discussion helps to foster a more fulfilling relationship.”
-Culled from PUNCH
Top Stories