Police Officer Assaults, Shoots At Motorist Who Tried To Overtake His Car In Calabar


A Nigerian police officer has reportedly assaulted and shot at a motorist who tried to overtake his car. 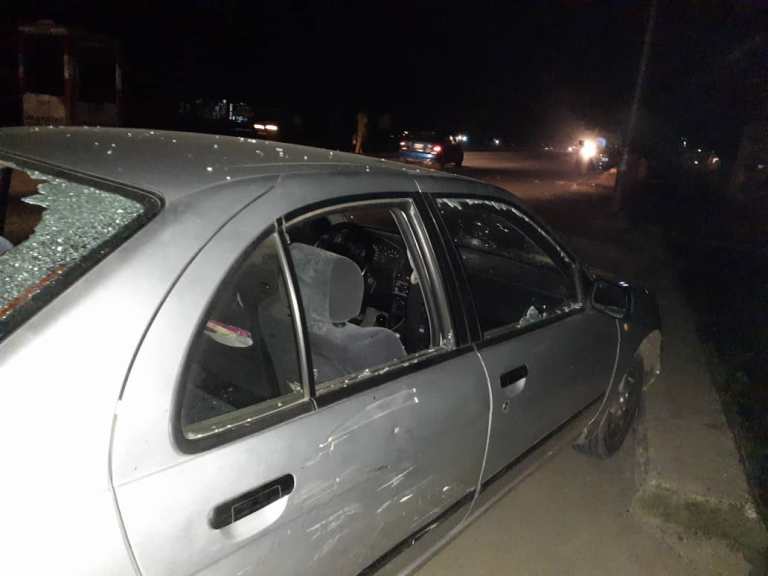 Mr Adekunle Adewumi's damaged car
According to Premium Times, a Nigerian police officer allegedly beat up a motorist and opened fire on him on a highway for attempting to overtake his car.

Adekunle Adewumi, a sales representative with a Lagos-based pharmaceutical company, told PREMIUM TIMES, Monday evening, that the police officer got angry with him for daring to honk his car horn while attempting to overtake him.

Mr Adewumi was driving a Nissan Almera car, while the officer, identified as Andy Amama, a police inspector attached to the zonal police headquarters, Calabar, was driving a tinted Toyota Camry.

Mr Adewumi said Mr Amama was driving recklessly, swerving from one side of the road to the other, maybe in a bid to prevent him from overtaking him.

“I was forced to drive on the median, to avoid being hit by him. But he still swerved towards me and then scratched the rear passenger door of my car,” Mr Adewumi said.

When he pulled over and stepped out of the car to assess the damage, Mr Amama came over, punched him in the face and chest repeatedly, pushed him down on the ground, kicked him multiple times, and then smashed the windscreens of his car, Mr Adewumi told PREMIUM TIMES.

“As he was kicking me, he kept shouting at me, ‘how dare you? Who are you to horn at me like that, who are you? Do you know me?’”

Mr Adewumi said a co-worker was inside the car with him but ran out of sight when he saw how furious the police inspector was.

He said the inspector pulled out his pistol and fired at least twice at him and passers-by who had gathered at the scene and were protesting against the officer’s action.

“He left with my car key after assaulting me. I thought it was over. I was waiting by the road, preparing to tow the car away to a safe place, when he came back with other policemen in a truck. I was handcuffed, thrown into a police truck and taken to Ikpai Omni police station along 8 miles.”

Mr Adewumi’s vandalised car was towed to the police station that night.

“At the police station, he accused me of vandalising his car and also said I brought people from the community to attack him.

“Of course, these were all lies; I don’t live in Calabar or anywhere in Cross River, I can’t even speak the local language and I don’t know anyone in the community, so how could I have talked people into attacking him?

“When the police officers at the station listened to my statement and also saw how I was in pain, they released me to go that night.”

By Monday afternoon, Mr Adewumi was in a hospital in Calabar to get medical help. “I have swollen jaws and legs,” he told PREMIUM TIMES.

He has lodged a report with the National Human Rights Commission, Calabar, and also took to Twitter to narrate his experience, with the hope of getting justice.

The Complaint Response Unit of the Nigeria police said on Twitter on Sunday that it had received a complaint from Mr Adewumi and that they were investigating it.

The divisional police officer, Ikpai Omni police station, Henry Nwachukwu, confirmed the incident to PREMIUM TIMES but declined to comment further on it.

“I have been reading stories like this in the media but I didn’t know it could ever happen to me. I am now so traumatised…. I want justice,” Mr Adewumi said on Twitter, via @damiancaring.
Top Stories