Meet Prof. Goodenough, The Oldest Man Ever To Win The Nobel Prize (Photo)


Professor John Goodenough has become the oldest man ever to emerge winner of the prestigious Nobel Prize. 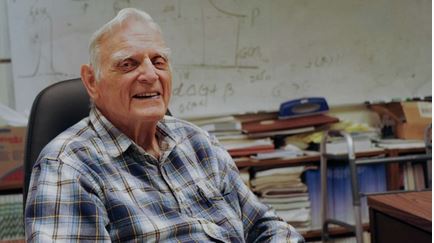 John Goodenough, a 97-year-old man,  has emerged the oldest Nobel Prize winner across all fields.

Goodenough is one of three researchers who won the Nobel Chemistry Prize on Wednesday for the development of lithium-ion batteries, paving the way for smartphones and a fossil fuel-free society, the Agence France Presse, AFP, reports.

Goodenough is from the United States.

“This lightweight, rechargeable and powerful battery is now used in everything from mobile phones to laptops and electric vehicles… (and) can also store significant amounts of energy from solar and wind power, making possible a fossil fuel-free society,” the jury said.

“Lithium batteries have revolutionised our lives since they first entered the market in 1991,” and were “of the greatest benefit to humankind”.

This year’s Nobel season kicked off on Monday with the Medicine Prize awarded to Americans William Kaelin and Gregg Semenza, and Britain’s Peter Ratcliffe.
Top Stories