The Nigeria Football Federation, NFF, confirmed Dennerby’s resignation in a tweet on their official Twitter page on Friday. 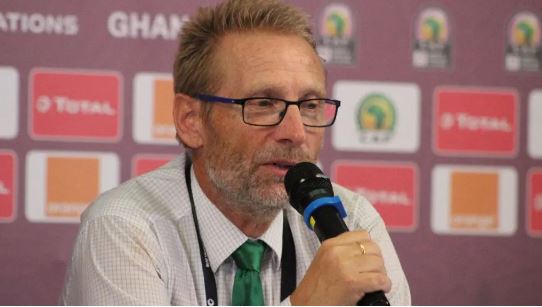 Thomas Dennerby
Nigeria women’s head coach, Thomas Dennerby, has resigned from his post after the Super Falcons failed to qualify for the Tokyo 2020 Olympics, following a 1-1 draw at home with the Ivory Coast in the second leg qualifiers at the Agege Stadium on Monday.
The Nigeria Football Federation, NFF, confirmed Dennerby’s resignation in a tweet on their official Twitter page on Friday.
“As for Mr. Thomas Dennerby, we have received his resignation letter and of course, he has his right to resign from a job.
“We want to put it on record that no Head Coach in the history of the Super Falcons has been afforded the level and readiness of support that has been provided Mr. Dennerby by this Board.
“Perhaps, one of the reasons he left was because we did not accede to his request to bring in more expatriate coaches and an indigenous coach who do not have the required license.
“If we had agreed to his request for more expatriate coaches, that would have left our indigenous coaches presently with the team in the lurch.”
Top Stories