A friend of the embattled UNILAG lecturer who was indicted in the sex-for-grades scandal, has made some revelations. 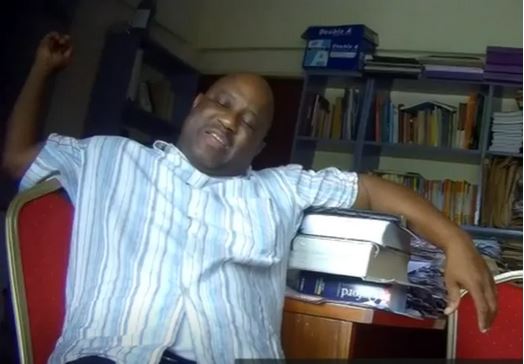 Boniface
Apparently, Boniface Ighenehu, the lecturer who was indicted in the sex-for-grades scandal, is a devastated man at the moment. Last week, there were reports of indications that the embattled lecturer, who was ordained pastor last year, was so devastated by the BBC report that he was contemplating suicide.
Now, a close friend of his who spoke with Vanguard anonymously, however, said nothing like that happened. Igbeneghu, it was learnt, was being protected by friends and family members so he would not harm himself.

The friend, a Christian, who said he had cause to rejoice with him for rededicating his life to Christ a few months ago, however, confirmed that he was being surrounded by friends and family members, noting that it’s unfortunate he was involved in such shameful act.

According to him, he probably was involved in this immoral act before he finally surrendered his life to God’s pruning and direction.

“I have a feeling that he had that weakness long ago. And I have had cause to rejoice with him when he claimed that he had rededicated his life”, the friend said.

“It is not unlikely that the amorous acts from his end were the days he was battling with the flesh. You will note that the investigation was over a period of nine months and he most likely was still struggling with the flesh all these while”.

Reacting to the development which has provoked the Nigerian Senate to initiate a law to deal with randy lecturers, CAN’s Director of Legal and Public Affairs, Evangelist Kwamkur Samuel Vondip, described the act as despicable, sad.

“We hear that investigation into the matter is ongoing according to a statement by his church and based on that CAN may not be in a position to say anything now”, Vondip said.
“As a legal practitioner, I will not also rush into any conclusion now, but there is need to stress that anybody being anointed to such a high office must endeavour to make himself or herself above board as Apostle Paul warned in his second letter to Timothy.

“I think when any man is being anointed such persons must be properly examined to avoid such embarrassment to the Body of Christ. After the investigation if he found guilty, I expect that he should repent and take some time off to make peace with himself and reconcile with God”.

He stressed that CAN as a body does not have any special punishment for persons who break his oath of office.

“CAN cannot decree any punishment for such persons but on a personal note, there is no way one can say here that if found culpable he would not escape prosecution because the state is involved and the rights of some impressionable Nigerians are at stake too.”
Top Stories