The story has been told of two mothers of triplets who survive by begging for alms in a community in Benin. 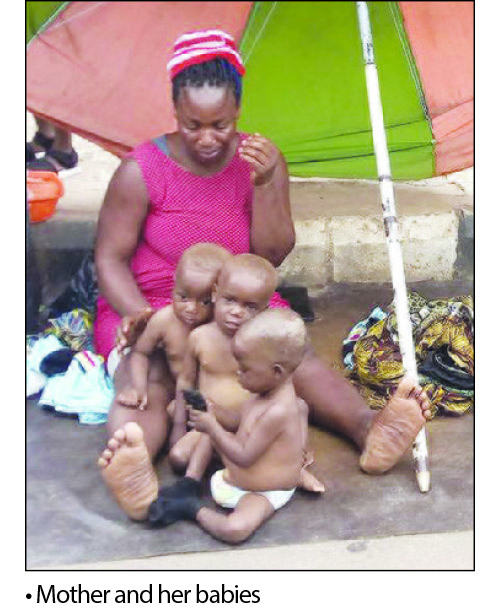 The Oba Ovoramwen Square, popularly known as Ring Road, is strategically located at the heart of Benin City, the Edo State capital.

One of its significant traits is that those travelling to the east, north, west and southern part of the country can pass through the Ring Road to their various destinations.

The Ring Road is seen as a melting point for the people of the state because of its volume of commercial activities.

Various clergymen also take advantage of the busy nature of the Ring Road to preach to  passers-by.

Despite all the activities that are synonymous with the place, two striking things that have attracted attention at the Ring Road are two women, Mrs. Ngozi Michael, 32, and Mrs. Ndoka Chukwu, 35, who gave birth to triplets.

The two women have made the Ring Road their place of earning their daily bread. As early as 6am every day when people are hurrying to get to their places of work, the two women position themselves at strategic locations of the road to beg for money from passers-by.

They position themselves in such a manner that will not lead to rivalry and competition between them, as they conspicuously lay  their babies on the mats under their umbrellas for passers-by to see and show them compassion.

The women do not sing songs to draw attention to themselves but the way and manner they position themselves makes it very difficult for people not to see   them when they pass through the Ring Road.

To these women, the Ring Road is their “Beautiful Gate” where they get their silver and gold on a daily basis.

Speaking with Daily Sun on what formed her choice of begging at the city centre with her triplets, Mrs. Ngozi Michael, said though she did not like begging for money from the members of the public, she has no choice because she and her children must survive.

“I am 32 years old. I have  two children before I gave birth to this triplets making them five children all together.

“On 28th of this month (September) my babies will complete 10 months. I take care of the babies through what I get from the members of the public.

“I would have started a business of my own if I had the money. I learnt hair dressing and that was in 2006 when I had my first child. I closed my shop because I could not pay the rent.

“My children have dropped out of school because of financial constraint in the family”, she said.

Asked why she did not enrol the children in public schools, Mrs Michael said she was new in the state.

“We are new in this state and I have not been able to enrol my children into any of the government schools around. I stay at Aduwawa area of the state capital.

“I do not like the way I am here begging for money so I need financial assistance to be able to start up my business again”, she said and appealed to government to give her husband job to enable him take care of the family.

“I want the government to give my husband job so that he will be able to take care of us”, she pleaded.

On her part, Mrs. Ndoka Chukwu, 35, who had two set of triplets in two deliveries,  said circumstance led her into begging, adding that the option of begging came to her after her husband abandoned her to her fate.

The National Diploma holder in Business Administration from Akanu-Ibiam Polytechnic, said she  depends on begging for alms at Ring Road and sometimes market places to be able to take care of her children’s needs.

“I obtained National Diploma in Business Administration at Akanu- Ibiam polytechnic but I could not further due to some circumstances. And I was not able  to get a job before I got married.

“I delivered through operation in the hospital. My husband was with me but  after the delivery he told me  he was going to look for money to pay the hospital bill amounting to over N300,000 and he absconded,” she said.

She said It was a good Nigerian that paid her hospital bills before she could leave the hospital.

“We started coming out when they were five months old. I have six children including these ones. My first delivery was triplets,” she said.

Mrs Ndoka explained that things are very difficult for her and the kids and that they  only survive on the help from good Nigerians since their father ran away.

“It’s from my coming out like this with the children that I get money to buy baby food, pampers, clothes, drugs and also take them to the hospital when they are sick and also take care of the school fees and upkeep of the first set of triplets.

“Not that I like begging for  money like this but if I refuse to take them out I will not get money to feed and take care of them.

“So, I prefer coming here to seek assistance because no one will feed me and my babies for more than one day if I stay at home”.

On how much she is spending on the children, Mrs Ndoka said she spends an average of N20,000 weekly to take care of the children and that she is able to do that because of kind hearted Nigerians who often supported  her children with money and other items.

“A tin of baby food can’t last us for a day, N4,000 pampers can’t last for a week, I don’t even talk of how much I spend on drugs and taking them to hospital for treatment.

“My rent has expired now, I  My rent is N4,000 per month and I paid six month. I live in a room and parlour”, she explained.

Asked the whereabouts of her husband, Mrs Ndoka said, “I am not even thinking about their father, my problem now is how to take care of my children so that they can become somebody in future and not to think of the man who abandoned his responsibility.”