After NAFDAC announced the ban on sale of Sniper in open markets, major markets in Abuja have yet to comply with the order. 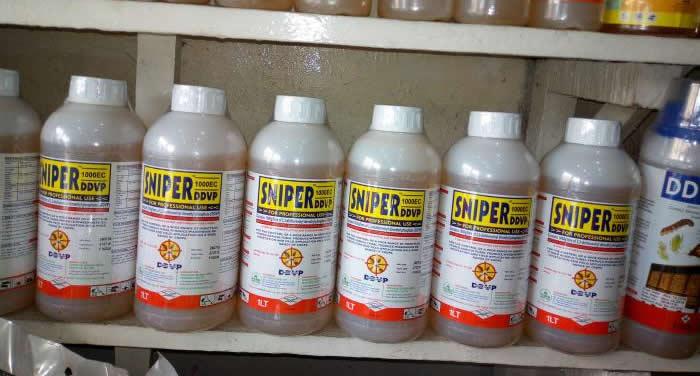 Nearly two months after the National Agency for Food and Drug Administration and Control announced the ban on sale of Sniper and other brands of agricultural formulations of Dichlorvos in open markets, major markets in Abuja have yet to comply, The PUNCH reports.

In a bid to curb the spate of suicide by poisoning, NAFDAC Director-General, Prof. Moji Adeyeye, had said products like Sniper should only be used for outdoor purposes and not private homes while also banning the importation and manufacture of 100ml pack size of agricultural formulations of Dichlorvos with immediate effect.

The statement had read in part, “NAFDAC is giving a two-month (up to August 31, 2019) notice to brand owners/distributors to recall and withdraw their products from open markets and supermarkets that do not have garden corner/shelves to the agro dealer outlets.

“The sale of Sniper insecticide and other Dichlorvos brands in open markets and supermarkets nationwide is prohibited with effect from September 1, 2019.”

The agency said CropLife Nigeria, in collaboration with NAFDAC, had agreed to provide antidotes against Dichlorvos poisoning in tertiary and secondary medical centres across Nigeria, as well as the reformulation of all Dichlorvos preparation to include “bitter agents and vomiting induced agents.”

It was, however, learnt that the antidotes had not been given to major tertiary and secondary hospitals within Abuja.

A visit by The PUNCH to major chain stores like Shoprite revealed that there was compliance with the directive.

However, Sniper and other similar products were still being sold in markets located in Dutse Alhaji, Kubwa and several other suburbs within the FCT.

But the Director, Veterinary Medicine and Allied Products at NAFDAC, Dr Bukar Usman, told The PUNCH that the agency had begun enforcement.

Usman said, “We have been doing enforcement but it is not just Sniper that is on the list because Sniper is a brand. We are mopping up all Dichlorvos products that come in 100ml. In fact, we have even stopped the registration of 100ml size.