Foreigners In S.Africa Appeal To Be Relocated After Attacks


Hundreds of foreign nationals took to the streets of Cape Town demanding to be relocated from South Africa after camping at the UN refugee agency office for a week. 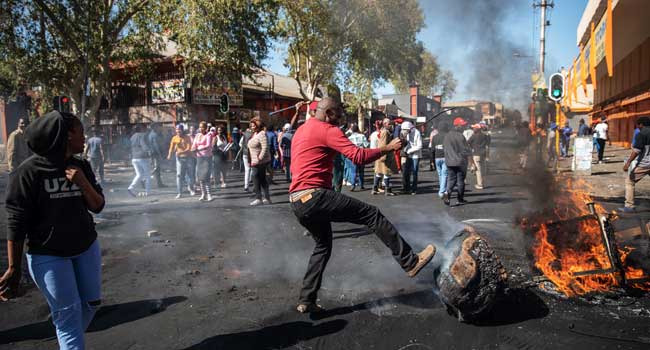 Hundreds of foreign nationals on Wednesday took to the streets of Cape Town, demanding to be relocated from South Africa after camping at the UN refugee agency offices for a week.

The foreigners, many of whom described themselves as asylum-seekers, say they no longer feel safe in South Africa after a surge of xenophobic attacks last month.

“Save lives of refugees before it is too late,” said one slogan, painted in green on a white banner.

Many of the protesters have been camping at the offices of the United Nations High Commissioner for Refugees (UNHCR) in Cape Town since October 9, vowing not to leave the premises until the agency addressed their concerns.

Children play as hundreds of people, originally from Rwanda, DR Congo, Burundi, and Bangladesh, sleeping in a corridor close to the offices of the United Nations High Commission for Refugees (UNHCR) on October 8, 2019, in Cape Town.

These people are asking the UNHCR to intervene on their behalf as they say they don’t feel safe in South Africa any more, due to high levels of crime as well as xenophobia, and want help in getting home, or to another country.

The numbers had grown steadily over the past week, spilling out from corridors to the kerb outside the building.

“We marched to parliament for the government to hear us and to send a loud and clear message,” said Sylvia Nahimana, a group representative from Burundi.

“We have been negotiating with them since 2008 but the killing still goes on.”

‘No future for us’

Xenophobic violence left at least 62 dead that year. Seven people were killed in 2015 and 12 died in the latest spate of attacks this year — most of them South African. The incidents occurred mainly in the Johannesburg area.

The continent’s most industrialised economy is a magnet for migrants searching for better job prospects and asylum seekers looking for safety.

The country attracts people from neighbouring Lesotho, Mozambique and Zimbabwe.

Others come from farther afield including the Democratic Republic of Congo (DRC), Rwanda, Burundi, Nigeria, and South Asian countries.

Seen as competing with locals for jobs, they are often the first to come under fire when South Africa’s chronic unemployment and inequality boils into resentment.

“We aren’t safe here and we aren’t safe in Bangladesh either,” said Hafeez Mohamed, a political dissident who sought refuge in South Africa’s Northern Cape province, where he saw his grocery store burned down.

“They treat us like chickens and we don’t want to be chickens here anymore.”

The protest broke out following a visit by the UNHCR chief.

“Preserving fair and efficient asylum systems is vital,” said Filippo Grandi in a statement on Wednesday.

“But to function effectively, they must be accompanied by safe, regular migration channels and other stay arrangements.”

But Grandi noted that resettlement to third countries was a “very limited option for refugees worldwide”, as the number of resettlement places was dropping.

South Africa is home to 268,000 refugees and asylum seekers, according to government statistics. They are mainly from Somalia, Ethiopia, Zimbabwe, and the DRC.

But the exact number of foreign nationals is unknown as the majority are undocumented.

“We want to go somewhere out children have a future, where we aren’t segregated.”

“There is no future for us here,” he added.