The Spiritual Leader of Adoration Ministry Enugu, Rev. Fr. Ejike Mbaka has tackled the governor of Anambra state over the recent fire incident. 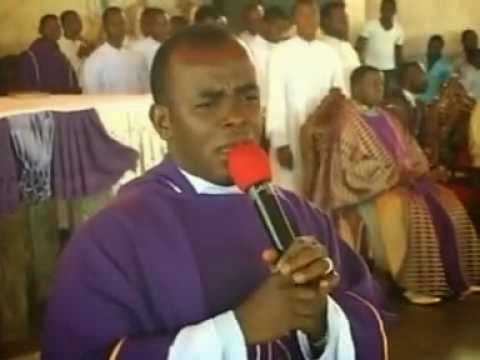 Father Mbaka
Popular man of God, Father Mbaka has spoken about the fire accident in Onitsha that claimed many lives and destroyed properties.
According to him, it is a shame that Anambra has no functional fire service despite the market being one of the busiest in Africa.
He also questioned why tankers will not fall while we have bad roads everywhere in Nigeria. He blamed the Governor and Anambra politicians for not constructing the roads.
According to him, politicians will take advantage of the tragedy, do eye service and give compensation to some of the victims. At the end, many of the victims might receive N10,000 after the money is shared. Who is fooling who? He also sympathized with the victims.
Speaking further, he said that in a sane society, Governor Willie Obiano should resign and tender apology.
According to him, markets, schools and more should be closed until the governor resigns or live up to expectation.
Mbaka said Christianity is a religion of fire. He gave instance of how Holy Spirit fall on the apostles. He stated that the masses should be in charge of their destiny.
He frowned at why some people should blame Hausas for the incident. According to him, Hausa people don't even know that we exist. He gave instances on how Igbo politicians loot money awarded for projects. He used Enugu airport as an example and said many Igbo politicians use substandard products for its construction after collecting huge allocation from Federal Government.
Mbaka stated that people no longer value the words of prophets. He wondered why people should be arguing with prophets after collecting N10,000 from politicians. According to him, he started speaking against politicians right from the days of Babaginda and never knew Buhari before he started talking about him. He stated that he laughs when people think that he is supporting Buhari because of any financial gain.
Mbaka said time will come when Igbos will start looking for priests for solutions. He believes that Hausas are not our problem. The Igbos are their own problem.
According to him, when he talks many say that he is a politician and should face his priestly work. He wondered what people understand by priestly work.
Watch the video on the link above. Start from 6mins of the video and watch him talk:
Top Stories