A schoolgirl has been given the beating of her life for daring to date a married man. 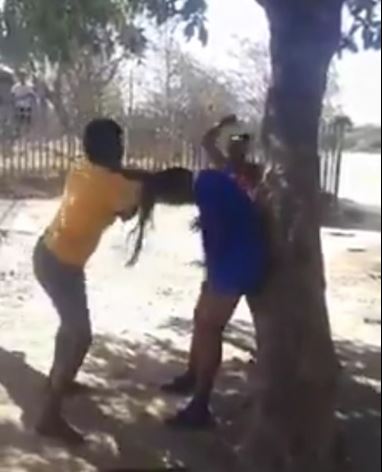 Girl being beaten for dating a married man
Two women have been filmed beating the hell out of a young schoolgirl for dating a man married to one of the women.
The sad video has sparked outrage.
They were seen beating the schoolgirl up. One of the women was busy beating her, dragging her by the hair while the other was busy flogging the girl.
The event happened in South Africa.
Social media reactions are divided on the disturbing video.
While many are blaming the women for assaulting the young secondary student instead of confronting the husband, few people blamed the schoolgirl for dating a married man old enough to be her father instead of concentrating on her education.
Watch video below:

Disturbing Video: Ladies Beat Up, Flog Schoolgirl In Uniform For Dating A Married Man, A Husband To One Of Them!!!!! This is bad!! Why not confront the husband? I hope they arrest them for assault. #SouthAfrican #SouthAfrica #Limpopo #CheatingHusband