A lady has embarked on a lone campaign against sexual predators in Ahmadu Bello University and Kaduna State University calling out one of the lecturer who she claims sexually assaulted her. 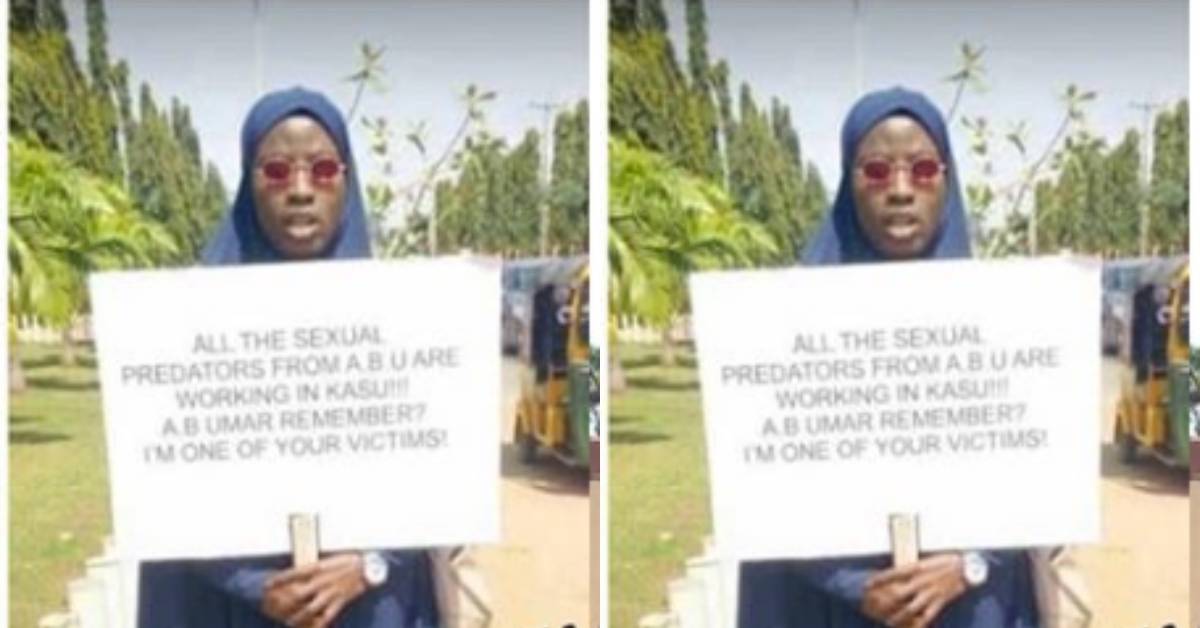 A lady has embarked on a lone campaign against sexual predators in Ahmadu Bello University (ABU) and Kaduna State University (KASU).

Carrying a placard, the lady wearing her hijab stood  on the road to campaign against the sexual predators which she claims work in ABU and KASU in Kaduna.

She calls out one of those who she claims sexually assaulted her, she reveals his name as A.B UMAR.

ALL THE SEXUAL PREDATORS FROM A.B.U ARE WORKING IN KASU!!!! A.B UMAR REMEMBER? I’M ONE OF YOUR VICTIMS

This comes after a BBC journalist, Kiki Mordi exposed some lecturers in her Sex for Grades investigation going on in universities. Videos and faces of some of the sex predators in universities were revealed and the journalist got some death threats but in a statement, she said she was not bothered.

“I have received subtle threats since this work was completed but I am not bothered because the BBC takes the security of employees seriously.

Before embarking on this project, the team prayed a lot and also sang because it helped to calm the nerves. But I had to go through the training I received over and over again because I wanted to get it right.

The biggest goal of this work was to be louder than the aggressor because sexual harassment is very loud. I wanted it to be silenced.

I am happy that a lot is changing already since the documentary was release and I can confirm to you that one of the lecturers at the University of Lagos caught sexuallyharassing a prospective student has been dismissed by the institution.

I believe it doesn’t stop there until there is a conviction. We have to break that culture of impunity.”