Sagay said he would personally demand the removal of Oshiomhole if Edo State, the only state controlled by the APC in the South-South, was lost to the opposition. 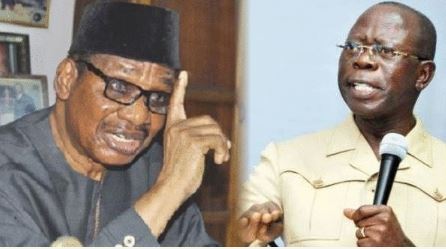 Prof. Itse Sagay (SAN), chairman of the Presidential Advisory Committee Against Corruption (PACAC), said at the weekend that Comrade Adams Oshiomhole, national chairman of the ruling All Progressives Congress (APC), is creating more problems for the party with his aggressive attitude.

Sagay said he would personally demand the removal of Oshiomhole if Edo State, the only state controlled by the APC in the South-South, was lost to the opposition.

In a chat with Daily Independent on the lingering rift between Oshiomhole, a former two-time governor of Edo, and his successor, Governor Godwin Obaseki, Sagay – who is also a leader in the APC – said he had severally advised Oshiomhole on the need to be less combative in his dealing with people but added that the former labour leader ignored his advice.

According to him, Oshiomhole’s aggressive approach has cost the APC some states in the country such as Zamfara, Rivers, and others.

Expressing worry over the developments, Sagay said if care was not taken, the APC might be left with no single state by the time Oshiomhole completes his tenure, given his confrontational approach to issues.

According to the legal expert, “I have advised Oshiomhole rather unsuccessfully to stop being combative, to stop punching, and all these aggressive behaviour.

“In a leadership position, you need to stoop to conquer, you need to be restrained. Even when people are wrong and you want to correct them, you need to show that you are not after humiliating them and that you will work with them to correct things; not to be aggressive, threatening and engaging in pugilistic method. I told him this but he ignored it.

Speaking further, Sagay also advised Oshiomhole, who is a former president of the Nigerian Labour Congress (NLC), not to be treating the APC as a trade union organisation but as a political party.

“This is not trade unionism. Being a leader of a political party does not involve war but this is his attitude. He needs to persuade people and even when somebody is wrong, he needs to build up the person’s confidence so that they can take your correction.

“So, I think Oshiomhole is creating more problems for the APC by his aggressive attitude. By this aggression, if we lose Edo State, which is the only state APC has in the South-South, I am personally going to call for his removal as APC chairman.

“If by what is going on now between him and the state governor we lose Edo State, I will personally call for the removal of Adams Oshiomhole. Otherwise, by the time he finishes his term, we will not have a single state left.”'

Corroborating Sagay, Chief Charles Idahosa, a former political adviser to Oshiomhole, said if the APC denied Obaseki a second term ticket despite his sterling performance, Edo would go to the opposition in the governorship election billed to hold next year.

According to him, what Sagay said about Oshiomhole’s belligerent attitude towards party members was nothing but the truth.

Idahosa, who said Obaseki was performing to the admiration of the people, threatened that he would leave the party should the governor be forced out of it.

He said he was surprised that Oshiomhole who brought Obaseki as his successor would be doing everything to frustrate the governor and get him out of office despite the fact that he had performed creditably well in just three years in office.

“When I read what Professor Sagay said, I wasn’t surprised because he is a man of truth whom I have always respected when he was in Benin.

“I have said it before in my previous interviews. I said that if they push Obaseki out of the APC either by omission or commission that is the end of the APC in Edo State, but we will not allow that to happen as we are ready to stand by Obaseki.

“This is a very strange phenomenon; a situation where a party will bring out a candidate, the candidate is very popular with the masses but a few people, led by the so-called national chairman of the party, will be saying they are not happy because he didn’t carry them along.

“The same national chairman will open his mouth and say Obaseki went to bring computer to use in collecting revenues. Do you want revenues to be collected by thugs and miscreants who will use weapons to beat up the people to force them to pay?

“You call yourself a national chairman, you came to Benin and no human being was with you apart from thugs and miscreants and inconsequential people.

“Oshiomhole should leave Obaseki alone and allow him govern. He is no longer the governor of Edo State. What is happening in Edo now is so embarrassing. I am fully in support of what Prof. Sagay said,” Idahosa said.
Top Stories