The workers, who first made their grievances known two months ago, said after intervention by the Lagos State Government,the company reneged and owed them five months’ salaries. 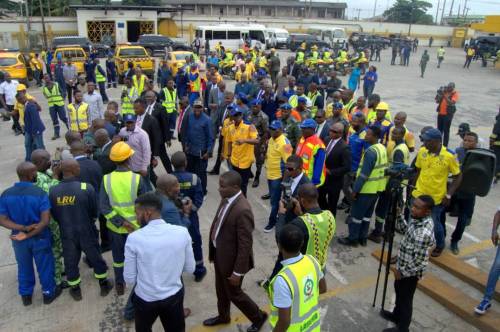 Emergency response in Lagos may soon grind to a halt following a fresh altercation between the Lagos State Emergency Management Agency Response Unit’s workers and a contracting company, Avantgarde Management Services, which the state government outsourced emergency response to.

The workers, who first made their grievances known two months ago, said after intervention by the Lagos State Government, the company reneged and owed them five months’ salaries.

PUNCH Metro had reported that some workers of the LRU had threatened to down tools over the five-month salary arrears, while a large number of them had reportedly stopped reporting for work.

It was gathered that the number of agents at the LRU call centre had been depleted, while calls to the 112/767 emergency numbers were now rarely picked because of the crisis in the LRU.

The correspondent learnt that after the workers’ protest in August at the LASEMA office at the state secretariat complex, Alausa, and the state House of Assembly, the company paid two months’ salaries to the workers out of the five months owed.

One of the workers of the LRU, who spoke on condition of anonymity, said after the payment of the two months’ salary, the company failed to pay the rest, adding that it owed the workers a cumulative of five months’ salaries.

He added that the workers’ pension and health insurance were also stopped.

“The company paid two months’ salaries, leaving a backlog of three months and now they have refused to pay another two months, making five months that we are being owed and the state government is not owing them.

“Apart from the salary, the staff HMO arraingment was stopped since February and the pension payment for over one year and staff taxes have not been remitted.

“It is so bad now that despite the fact that the state government pays the firm monthly to keep the emergency unit going, the company has subjected the staff to collecting N1,000 or N2,000 per operation each time we go out. We called the management to talk to us to know what is happening to our salaries but they kept giving us excuses. If this should continue, the LRU can never be what it used to be or improve.”

Another worker accused the new Director General of LASEMA, Femi Oke-Osanyintolu, of indulging the company’s negligence.

He said, “Towards the end of December 2018, the company said there was going to be a reduction in salary and a letter was given to us to sign to the effect of 16 per cent reduction in our salary and that this would enable it to pay as and when due.

“When we were not paid, we staged a protest at the State House and the Office of Civic Engagement called us and we held a meeting with the officials; it was in the meeting that we got to know that the state government only owed the company for two months, whereas the firm owed us five months.

“In September, we got information that the state government had paid the firm and the money was supposed to be used to pay the backlog of salaries but surprisingly, it paid only two months and the money didn’t even go round because some workers in some departments were not paid. As we speak now, we are being owed five months; we have had several meetings with the DG of LASEMA, but the truth is that he is indulging the company.”

A worker, who also spoke on condition of anonymity, accused the company of having no regards for the staff, adding that it had stopped all allowances.

When contacted by our correspondent, the Operations Manager of Avantgarde Management Services, Shola Ajisafe, declined to make any comment on the issue and directed PUNCH Metro to the LASEMA DG.

When our correspondent contacted Oke-Osanyintolu, he said there was no crisis with emergency management services in the state, adding that he was not aware of the salary arrears.

He said, “The LRU and LASEMA are one; however, LASEMA has a technical partner, Avantgarde, and this morning (Monday), I held a meeting with the management and they said that all was well and they had been responding to emergencies with us; so, the workers saying that they are being owed is news to me

“When we have our meeting on Wednesday, I will throw it at them but as I speak, the management told me that all was well and I quite agree with them that all is well, because we have been responding to emergencies.”