U-17 World Cup: Nigeria Secures Another Dramatic Win, Qualify For Round Of 16


Nigeria has secured a really dramatic win over Ecuador to qualify for Round of 16 in the U-17 World Cup. 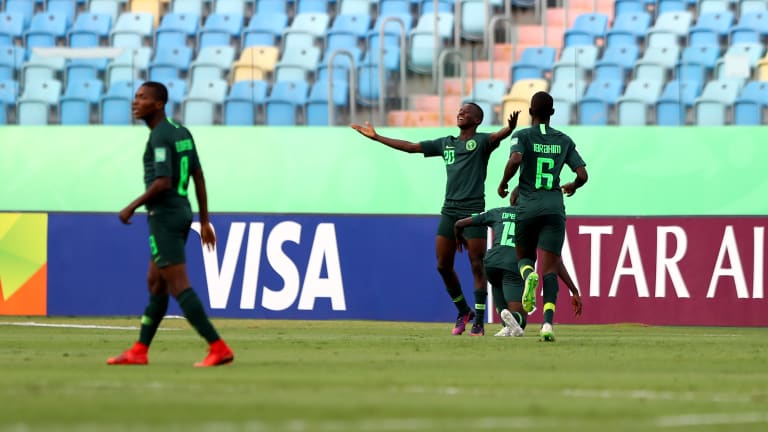 Nigeria’s Golden Eaglets Tuesday night won their second group game 3-2 against Ecuador to book a spot in the next round of the FIFA U-17 World Cup tournament ongoing in Brazil.

A hattrick from Ibrahim Said secured the dramatic comeback for the Golden Eaglets against Ecuador who were in a 2 -1 led until the eighty-fifth minute when Said scored the equaliser and reclaimed the lead for the Eaglets four minutes later.

Nigeria ran into the lead in the fifth minutes after a brilliant strike from Said. The youngster capitalised on an error by the Ecuadorian goalkeeper firing home from 35yards.

Ecuador grabbed an equaliser in the 10th minute after Nigerian goalkeeper Daniel Jinadu tipped an attempt onto the upright but the ball unfortunately ricocheted off his back into the net.

Ten minutes into the match in the second half, Ecuador took the lead from the spot as VAR spotted foul in the 18-yard box to award a penalty which was converted by Johan Mina.

With the second win in a row, Nigeria sits atop Group B with six points while Ecuador is second with three points.

Hungary and Australia are third and fourth on the table with a point each.

The Eaglets beat Hungary 4-2 in the opening match while Ecuador defeated Australia 2-1.