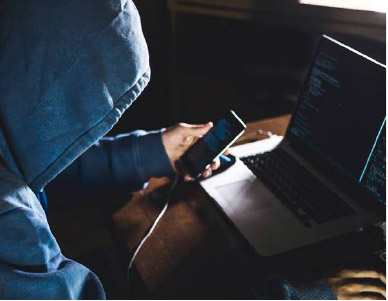 Online dating has come to stay. It is the process of searching for sexual partners on the internet through different social media platforms like Tinder, Grinder, dating sites or even through Facebook friendship. It was so good that most youths confess they prefer online dating to the traditional dating. They claim that it gives them the opportunity of knowing more about the person before meeting him or her physically.

Some of the beneficiaries even confessed that they have found true love in the arms of people that ordinarily they wouldn’t have summoned enough courage to approach. Others said they have met their husbands or wives on the internet and are happily married and have kids.

However, despite finding true love from the internet, it has turned traps mostly for some ladies as most unemployed youths (internet scammers) have taken over dating sites as their money making machines, where they dupe many wealthy single ladies desperately in need of love.

Some suspects recently paraded by the Nigeria Police in Abuja confessed how they used dating sites to defraud good number of wealthy ladies of their hard-earned money in the name of promising them marriage.

A 44 year old father of two, Ernest Orgbo, confessed that he had been in the internet scamming business for some months after losing his job. He acknowledged that the business is good and an easy going type with huge amount of money in return if one can adequately establish a solid relationship with his clients by making them believe he is truly in love with them.

He confirmed that he had about 12 youths whom he is currently training on the trending business in Lugbe before they were arrested and all the requirements for start-up is a laptop and internet access.

He said that he is a medical doctor with the United Nations in the internet world and portrayed himself as passer who is eligible to marry expatriates by using online dating sites to get clients.

He said he regretted his actions and that it was joblessness that lured him into the crime business, pleading with the law enforcement agency to give him another opportunity to adequately make use of his talents in the development of the nation.

“My name is Ernest Orgbon and 44 years old am married with two children, my wife and children are in Benin. I graduated from Ambrose Ali University after which I worked in a private laboratory and later got an appointment as a sales representative, and was what brought me to Benin in Edo state to cover Edo Delta. Then I proceeded my Masters programme, in 2012 a got an appointment with Global Health Limited, that based in Lagos.

“In 2016 immediately after the general election, I lost my job when the company had problem with sourcing drugs from abroad because they need dollars to buy products, that was how I became jobless and I didn’t want to continue working for pharmaceutical companies I wanted to start up mine.

“In June this year, a friend of mine whose name is Endurance and into internet fraud, introduced me to the business and that was how I left my family for Abuja, in Lugbe precisely.

“I have about 12 boys. who am currently training on how to manipulate their clients and how we operate is that you see a woman on the internet, you ask her status and profession, then you introduce yourself and tell her that you desperately need a woman to settle down with, that you have divorced your wife.

“When your proposal is accepted, you build a relationship, after which you start demanding by asking her to book for your vacation because the United Nations will not allow you to travel and be with her without insuring your life and health, after which you will request for your flight ticket, that is how we make our money and it depends on the numbers of days we have agreed on,” he narrated.

Another scammer and 22 year old undergraduate, Orgboma Tarry, confessed that he had been in the internet fraud business for about six months and most of his victims had been women he met on dating sites.

He said the business is an easy way of making it real big if you can be able to convince your clients that you truly love them and ready to marry them, disclosing that what led to his arrest was when he tried to defraud a man, who never believed, that it is easier with women because they are more emotional.

“My case is an attended fraud, I tried to defraud  Senator Ned Nwoke, the sum of N700,000, by pretending to be an assassin sent to kill his newly married wife, Regina Daniels.We bargained and he send N400,000 to me it was when I went to withdraw the money that I was arrested.

“I will like to tell my fellow young people that there is no easy way to getting rich. They should patiently work and wait for their time rather than seeking for cheap means”.

Abduramane Usman a Ghanaian among the suspects confessed that he is into internet scam and that he was introduced into it by a friend, who invited him to Nigeria.

However, despite all the ugly tales of the online dating sites some ladies still confessed their love for internet dating.

Joy Eka a banker said she prefer online dating to the normal traditional dating “We met on Facebook, We started chatting, when he asked me to pay him a visit in Abuja. I was somehow scared but I later made it. That was the beginning of this great union, you are seeing today.”

Anna Ega  from Wuse 2 also confessed that she still prefer online dating,’ though there are many scammers these days but if you are intelligent you can differentiate between the both”