Terror Group, ISIS Names New Leader, Warns America Not To Rejoice Over The Death Of al-Baghdadi


Terror group, ISIS has named a new leadership, sending a warning to America not to rejoice over al-Baghdad's death. 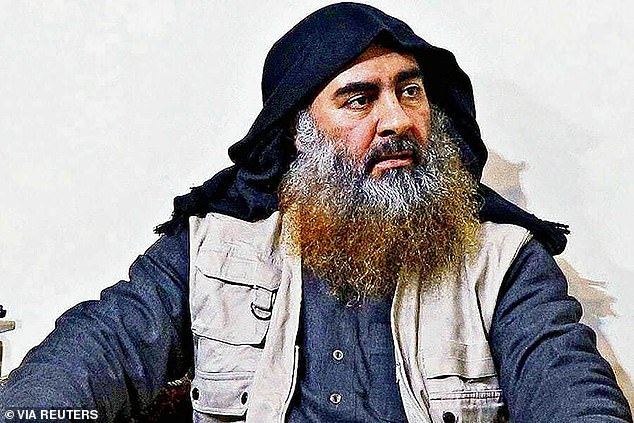 ISIS has confirmed the death of its leader Abu Bakr al-Baghdadi after the self-appointed 'caliph' died during a U.S. special forces raid in Syria last weekend.

The jihadists also confirmed the death of their former spokesman Abu Hassan al-Muhajir in a separate operation.

The message today is the first official statement from ISIS since Donald Trump announced Baghdadi's death five days ago.

However, the extremists warned America not to 'rejoice' in the death of two senior ISIS figures.

'America, don't you realize that the Islamic State is now at the forefront of Europe and West Africa? It is extended from the East to the West,' the statement said.

Warning that ISIS was not limited to the Middle East, the terrorists vowed that their extremist 'mission' would continue.

ISIS fanatics were also urged to heed Baghdadi's words in his final recorded message in September, when he urged his followers to break imprisoned ISIS members out of prison.

More than 10,000 ISIS prisoners are being held in Syria while another camp is home to some 70,000 people, mainly relatives of the extremists.

'We should expect to see a campaign for this message spanning various platforms, accompanied by pledges from across the world,' she said today.

The appointment of al-Qurayshi as the new ISIS leader contradicts rumours that Baghdadi's former security henchman Abdullah Qardash was set to take the top job.

Qardash, a former officer in Saddam Hussein's army, had met Baghdadi in a U.S. prison in Iraq after the American invasion in 2003. 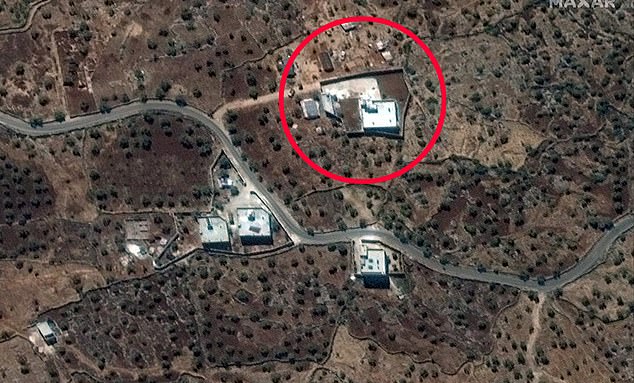 Before: A satellite view of what is believed to have been Abu Bakr al-Baghdadi's

compound in northern Syria, where he died in a raid by U.S. special forces on Saturday night

On Telegram, a messaging service, the Amaq news agency linked to ISIS has continued to post claims of attacks in the Middle East.

Baghdadi died after fleeing into a network of underground bunkers and tunnels that snaked through the compound in Syria, Trump revealed on Sunday.

The terrorist leader wore a suicide vest and dragged along three children as he fled from the American troops who had arrived by helicopter from Iraq.

Trump said that as U.S. troops and their dogs closed in, the militant went 'whimpering and crying and screaming all the way' to his death.

'He reached the end of the tunnel, as our dogs chased him down,' Trump said. 'He ignited his vest, killing himself and the three children.'

Trump also declared two days ago that Baghdadi's 'number one replacement' had been 'terminated', apparently referring to spokesman Muhajir.

Muhajir was killed on Sunday in a joint raid between Kurdish-led and U.S. forces in northern Syria, a State Department official confirmed on Monday.

Russia had previously voiced doubts about whether Baghdadi was really dead after numerous false rumours of his death over the years.

The American troops had confirmed his identity by matching his DNA to an Iraqi prison where he was held 15 years ago.

Baghdadi had been detained in Iraq after the U.S.-led invasion which toppled Saddam Hussein in 2003.

The operation against Baghdadi has already prompted fears of revenge attacks by followers of the terrorist leader.

A military operation led by Kurdish fighters in the Syrian Democratic Forces reduced  Baghdadi's so-called 'caliphate' to nothing earlier this year.

However, Baghdadi was widely seen as a figurehead rather than a day-to-day leader and his followers are still capable of mounting attacks.

Small units of fighters have since gone underground and continued to carry out guerrilla-style attacks in the region.

Security has been tightened at ISIS prisons in northern Syria where Kurdish guards were said to be on 'high alert'.

Baghdadi had urged his followers to break ISIS fanatics out of prison in the last weeks of his life.

There are also fears that 'sleeper cells' around the world will carry out reprisals, and Britain and France have both stepped up security.