A woman has been arrested by the police after she sneaked into another woman's room to steal a baby. 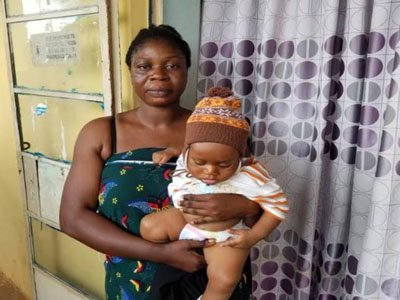 Falilat Olatunji caught after stealing a baby
A Lagos resident has been arrested by the police for alleged baby theft in Ogun State, according to TheNation.
Falilat Olatunji, a resident of 23 Jawando Street, Ayobo in Ipaja, allegedly sneaked into a woman’s room at Iyana Lajola, Mile Two, Abeokuta and stole her four-month-old son who was sleeping.
It was alleged that the child’s mother identified as Taiwo Bello was doing laundry within the premises and when she returned to her room, her child Ibrahim had disappeared.
Bewildered by the situation, the woman was said to have raised alarm which attracted neighbours and a search for the kid commenced.
When the baby was nowhere in sight, a community leader Alhaji Abdul Dawodu, it was gathered, ran to the Sabo Ilupeju Division to report the baby’s disappearance which prompted the police to be on alert.
Police spokesman Abimbola Oyeyemi, a Deputy Superintendent (DSP) said a search was immediately mobilised and operatives put on notice which paid off as a woman was sighted with a baby that fitted the description at Ilewo Orile and immediately arrested.
“On interrogation, the suspect confessed to have stolen the baby on order to deceive her husband he was the product of the pregnancy she told him.
“Investigation revealed that the suspect was once squatting in the same house with the parents of the baby and that she was present during the naming ceremony of the same baby.
“The baby has been reunited with his parents. The Commissioner of Police Bashir Makama has ordered the immediate transfer of the suspect to State Criminal Investigation and Intelligence Department (SCIID) for further investigation and prosecution.
“He appealed to members of the public to always beware of people around them because there are a lot of wolves in human skin,” said Oyeyemi.
Top Stories