Some Nigerian fraudsters have been arrested for scamming more than $6 million from widows in the US. 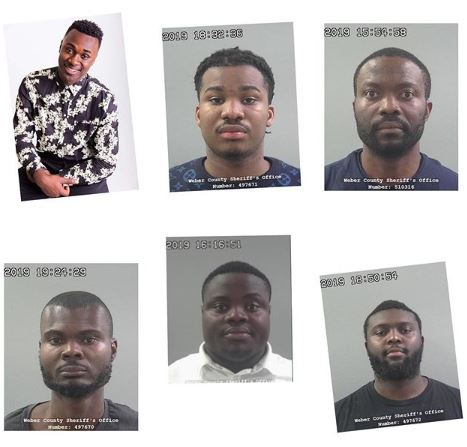 The Nigerian scammers
A federal grand jury returned a 10-count superseding indictment Wednesday afternoon charging eight individuals in connection with a fraud scheme primarily targeting widowed women over 65 years old.
The indictment alleges that over approximately two years, the defendants defrauded dozens of victims out of more than $6 million, which they laundered through accounts they controlled.
According to the indictment, the defendants and unnamed co-conspirators used social media and social gaming applications to target widows.
Charged in the indictment are Jeffersonking Anyanwu, age 25, Daniel Negedu, age 21, Onoriode Kenneth Adigbolo, age 31, Chukwudi Kingsley Kalu, age 28, and Godsent Nwanganga, age 24, all Nigerians living in Orem.
David Maduagu, age 27, a Nigerian living in Taylorsville; and Richard Ukorebi, age 38, and Adrianna Sotelo, age 20, both of West Valley City. Ukorebi is also Nigerian.
All defendants are charged with one count of conspiracy to commit mail fraud, three counts of mail fraud, and one count of money laundering conspiracy.  Anyanwu, Negedu, Adigbolo, Kalu, Ukorebi, Nwanganga and Sotello are also each charged with one count of money laundering.
The maximum potential penalty for each of the first four counts in the indictment is 20 years in prison and a fine of $250,000 (or double the stolen amount).
The penalty for each money laundering and money laundering conspiracy count is 10 years in federal prison and $250,000 (or double the laundered amount).
Anyanwu, Negedu, and Adigbolo were initially charged in an indictment returned by a federal grand jury in late May.  They were arraigned on the charges and entered pleas of not guilty.
Ukorebi, Maduagu, and Sotelo were previously charged by criminal complaint and arrested.  Ukorebi and Maduagu were ordered detained pending trial.  Sotelo is released on supervision pending trial.  Nwanganga is incarcerated on unrelated charges.
Kalu remains at large.
Top Stories