The mother of a boy rescued after he was abducted in Kano has raised alarm over his strange behaviour. 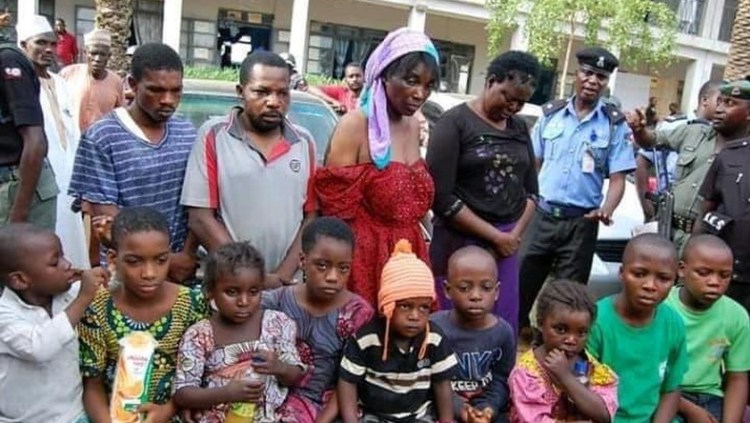 The abducted children rescued in Onitsha
Jamila Saleh, mother of Umar Faruq, one of the nine rescued Kano children that were abducted and taken to Onitsha, Anambra State, has raised an alarm over her son’s strange behaviors, a report by Daily Nigerian has revealed.
Recall that the Kano State Police Command which rescued the nine missing children had paraded six members of the kidnap gang.
The gang, according to the police, confessed to their crimes.
The children’s rescue seems to be exposing their parents to grief and disbelief than a respite.
In an interview with Daily Nigerian in Kano, Jamila Saleh, a mother of one of the rescued children, Faruk, who was renamed Onyedika Ogbodo, disclosed that she could no longer contend with some of the strange behaviors her son was showing.
According to her, her 10-year-old son no longer wants to perform the five daily prayers and other Islamic practices.
She stated that whenever Faruq was asked to pray, he would tell her prayer was mere physical exercises.
Mrs Saleh also disclosed that anytime Faruk was eating his meals, he would be performing Christian prayers as well as gestures from his forehead to his left and right shoulders.
“Since the rescue of these children, we started noticing strange behaviors from Umar.
“He does not like praying anymore and was even telling us that he would not do it because it is just an exercise.
“On the very day he was reunited with us, he recited Christian prayers instead of the Muslims prayers whenever we bring him food.
“His father and I had to forcefully stop him from doing that and other Christian acts. We had to teach him to say ‘Bismillahi’ before eating the food,” she revealed.
She also lamented that Faruq still exhibits lackluster attitudes towards Islam, saying that he does not want to go to mosque unless with much persuasions from his elder brothers.
Mrs Saleh also narrated how her son could not recognize her and his father, when they first met him at police command headquarters after their rescue, a situation that she said made her cry profusely.
“My son was abducted when he was five years, about five years ago so I’m seeing him for the first time after so long.
“What made me cry was how he could not recognize me and neither knows his father and I nor had he ever see me in his life. It was a terrible situation,” she stated.
Mrs Saleh also complained that Faruq has completely forgotten Hausa language, as he is now speaking Igbo language and Pidgin English, hence, they could hardly communicate with him.
“I am shocked as my son, a fully Hausa-born child, finds it difficult to speak the Hausa language,” she said.
She disclosed that they are now teaching him the Hausa language, describing Faruq as a brilliant boy and fast learner.
She then commended the Kano State Police command for rescuing the abducted children, including her son, thanking the general public for their concern over their plight.
Top Stories