President Muhammadu Buhari had on August 20 ordered a partial closure of Nigeria's land borders in order to check smuggling. 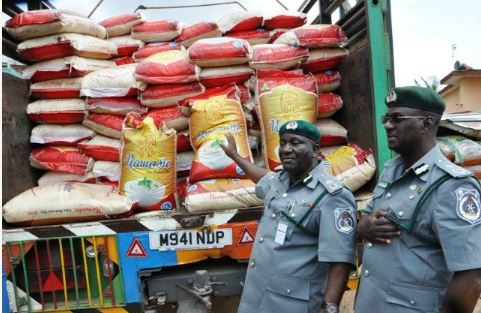 Barely three months after President Muhammadu Buhari ordered the closure of all land borders in the country, the Federal Government says it has seized over N2.3tn worth of contraband as a result of the intensive joint border patrol by security agencies.

President Muhammadu Buhari had on August 20 ordered a partial closure of Nigeria’s land borders in order to check smuggling of contraband into the country through the neighbouring countries.

But, in an interview with one of Punch correspondents on Thursday, Attah said the joint border security, consisting of all the agencies working together, had recorded some achievements, while the NCS as a separate entity had recorded some feats as well.

According to him, some of the items seized are “437,225 jerrycans of Premium Motor Spirit, popularly known as petrol, 363 vehicles, 32,814 bags of rice as well as several drugs, ammunition and guns.”

He added that 203 illegal migrants and eight traffickers had also been arrested.

The closure of the land borders had drawn the reactions of leaders of some neighbouring countries, including Presidents Nana Akufo-Addo of Ghana and Patrice Talon of Benin Republic.

There had been reports that the closure had severely affected the economies of the neighbouring countries, especially Benin Republic.

President Buhari had during a meeting with his Beninois counterpart, Patrice Talon, on the margins of the Seventh Tokyo International Conference for African Development, in Yokohama, Japan on August 28, 2019 said the partial closure of Nigeria’s borders with the Benin Republic was to curb smuggling of rice through that corridor as well as secure Nigeria’s land and maritime borders.

Akufo-Addo also said on Tuesday while addressing the delegation of a commercial bank from Nigeria that he was still hopeful that talks between his country and Nigeria over the closure of the land borders would yield a positive result.

“There is a lot of room for continuing talks between Nigeria and Ghana in order for a breakthrough to be reached,” he added.

But, the Comptroller-General of Nigeria Customs Service, Col Hameed Ali (retd.), had earlier said that the closure would be sustained until neighbouring countries complied with the ECOWAS protocols on transit of goods.

He stressed that the closure of the border by the Federal Government was undertaken to strengthen the nation’s security and protect its economic interests.

Ali, at a meeting with border stakeholders, comprising freight forwarders and security agencies on September 26 at Seme, said the closure was not intended to hurt anyone but to protect the nation’s interests.

He said, “Our interest is to make sure that our country is secure, the well-being of our people is ensured and our economy is secure. The step we have taken is in the interest of Nigeria; the step is not to hurt anybody but to protect our own interests as a nation.”

While some stakeholders and analysts have described the closure as a setback in the quest for the Africa’s integration, some others, especially farmers, described it as a move in the positive direction.
Top Stories