Expectations for more goals from the Rangers front men failed to materialize not for lack of opportunities created but for some unpardonable misses. 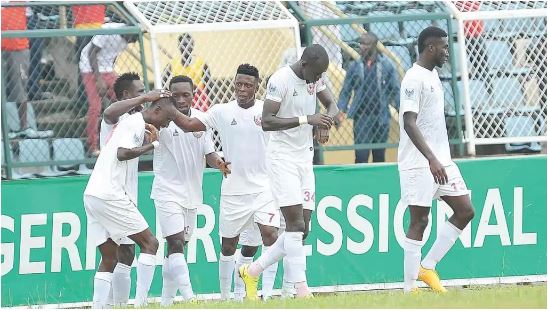 The return leg fixture which was settled before a packed Nnamdi Azikiwe stadium, Enugu, saw the former NNL star striker race onto an Nnamdi Egbujuo’ defense splitting cross to make hay and send the crowd into wild jubilations.

Expectations for more goals from the Rangers front men failed to materialize not for lack of opportunities created but for some unpardonable misses by Ifeanyi George and Nnamdi Egbujuo in the last ten minutes of the first stanza.

When both sides returned from the break, the visitors took the initiative in the middle of the pack with their shot precise passing of the ball that kept the fans at the edge of their seats for most part of the second half but they could not make this dominance count as Uche John and Akpos Adubi stood their ground in the heart of Rangers defense line.

The introduction of Ikechukwu Ibenegbu for tiring Chiamaka Madu early in the second stanza did little to steady the middle but he brought his experience to bear in the few times he was called upon as he did well to set up the attackers on three occasions that went begging.

Ibrahim Olawoyin and Sadick Abbas came close to extending the score for the host at the tail end of the match as Olawoyin’ shot from the edge of the box after dribbling past a sea of legs missed target by inches while Ghanaian born Abbas watched in awe as his well placed shot beat the goalkeeper but not the upright.

Coach Benedict Ugwu said after the pulsating encounter, “It was a good match and we thank God for the win that has taken us to the group stage of the competition. Our plan was not to concede and my players did well to contain them especially in the second half. Yes, we are going into a tougher stage of the competition but I have the confidence that we shall continue to make good representation for the country.”

Goal scorer, Chinonso Eziekwe was full of praise to God for the qualification, stressing, “It can only be God. I am really thrilled to have scored on my first start for Rangers and the goal helped us qualify for the group stage of a continental competition. We shall continue to work as a team to make us achieve our target in the competition which is getting to the final.”

Ikechukwu Ibenegbu who came in as a substitute said, “This was a very tough match but we showed character to hold on to our goal and qualified for the group stage of the competition. A.S.C Kara gave us a good fight but unity of purpose saw us through.”

Rangers qualified for the prestigious group stage of the competition on the away goals rule after aggregate score after both legs stood at 2-2 after losing the first leg 2-1 at Stade de Kegue, Lome a week back.