The LAFC star received nearly 70 percent of the vote to win the award after breaking several MLS records this season. 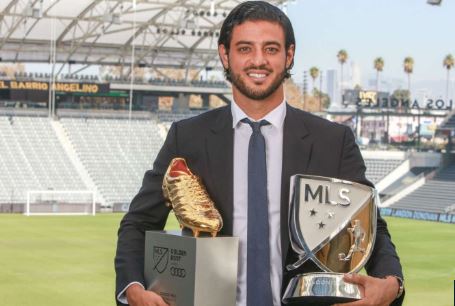 Carlos Vela has been named the 2019 MLS MVP after a record-breaking season with Los Angeles FC.

“For me [this trophy] is just a reward for all the effort, all the work every day at training,” Vela when presented with the award in Los Angeles on Monday. "I’m really happy to get this trophy.”

Despite taking his goal tally for the year to 36 with a double in the Western Conference semi-final victory over rivals the Galaxy, Vela drew a blank as Bob Bradley's team were eliminated from the MLS Cup playoffs by Seattle Sounders.

“This trophy just makes me more hungry. The next step is to be champion,” Vela said, referencing the defeat. “I will work very hard to get that trophy for my team, for my club. This one is just OK, but I want the other one.”

Head coach Bradley was recognized as MLS Coach of the Year, and the former U.S. men's national team boss said that Vela played a massive role in everything LAFC achieved this season due to his on-the-field contributions and off-the-field leadership.

“On a team there are different kinds of leaders, but it’s really important that your best player play a big role. We challenged Carlos see what a great leader he could be. To understand that it’s not just coming in and doing his thing on the field but showing other guys the best way to do thing,” Bradley said.

“As he continues to mature, he’s been able to understand what he means to his teammates. That’s effectively what being a great leader is all about.”