Our Children Miss Their Father Dearly - Sowore's Wife Opens Up


Omoyele Sowore's wife has talked about the man's incarceration and the way their children feel about their fathers absence. 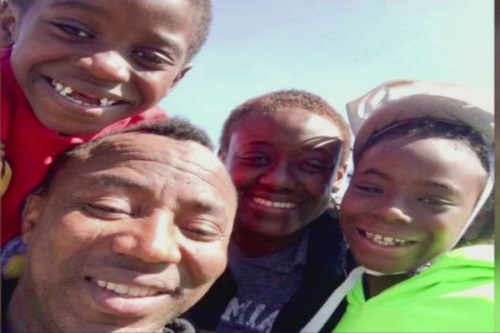 Opeyemi Sowore, the wife of pro-democracy activist, Omoyele Sowore, says the children of the Sowores miss their father, SaharaReporters reports.

Opeyemi said this while addressing journalists in the United States of America.

Sowore, alongside Olawale Bakare, is being prosecuted by the Nigerian government for insulting President Muhammadu Buhari, money laundering and treasonable felony.

The pro-democracy activist was arrested on August 3 in Lagos and has remained in the custody of the Department of State Services.

During his ongoing trial, Femi Falana, his counsel, said he would be released today, having perfected his bail conditions.

Nigerians and Sowore’s neighbours in the US have continued to ask for his immediate release.

Mrs. Sowore thanked everyone for showing the family immense support while hoping that her husband would return to New Jersey safely.

“We continue to pray for his safe return home to us in New Jersey," she said.