Some angry traders have striped themselves in protest as the Ondo government begins demolishing structures in a popular market. 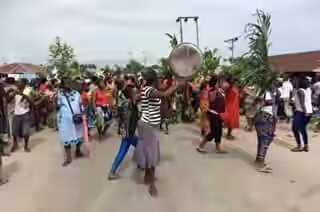 According to a report by Punch Metro, the Ondo State Government on Tuesday, removed all illegal structures at the Igbokoda International Market in Ilaje Local Government Area to ensure sanity at the market.

Mr Sunday Lebi, Permanent Secretary, Ondo State Agency for Commerce, Industries and Cooperative Services, who made the disclosure while addressing newsmen in Igbokoda, said the exercise met resistance from some market women.

Lebi warned that government would not tolerate the act where some people would disrupt government officials from carrying out their duty.

He said that the officials were prevented from carrying out their duty by some market women who stripped in protest and started raining abuses on them.

“They were also attacked with stones and other dangerous weapons,” he said.

Lebi said that the agency had the mandate of making the market functional to enable it generate income into government’s coffer.

“It is an aberration for anyone to erect additional structure which stands as obstruction to human and vehicular movement.

“We went there to ensure sanity, having held talks with them before the day. Similar exercises have been carried out in some markets across the state.

“Illegal structures destroy aesthetics value and orderliness of the market and they are dangerous to lives because vehicles do go in and come out.”

He, however, said government would continue to employ diplomatic and realistic approach to address the situation to ensure sanity in every state-owned market.

The permanent secretary advised traders to occupy the vacant locked-up shops in the market and pay their rent as when due to enable the state government attend to the market needs.

He warned that officers of the agency caught engaging in sharp practices would be sanctioned accordingly.

”The markets were built by the state government and there is an agency empowered to generate revenue for the government,” he said.