The former Tottenham defender was forced to don the gloves after the Premier League champions lost both Ederson and Claudio Bravo against Atalanta. 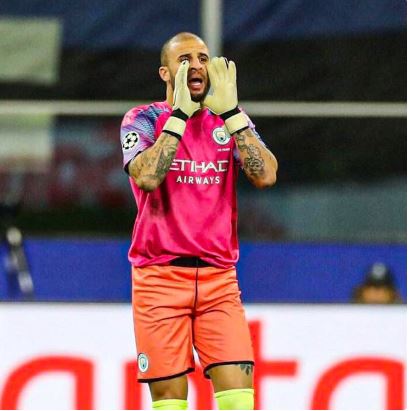 In a truly iconic moment, Manchester City defender Kyle Walked was called on as a goalkeeper in the club's 1-1 Champions League draw against Atalanta on Wednesday.

With Ederson taken off at half-time with a suspected injury , his replacement Claudio Bravo became the first substitute goalkeeper to receive red card in Champions League history with nine minutes left at San Siro.

That led to Pep Guardiola bringing on Walker as his third-choice keeper, and though the right-back looked reluctant to pull on the gloves he did produce an early save from the free-kick that was rewarded following Bravo's dismissal.

While Walker did fumble the effort, the 29-year-old ultimately managed to keep hold of the ball and in the process made more saves than either Ederson or Bravo on the night.

Walker avoided any more action for the rest of the match as City did well to hold on for a point which leaves them on the cusp of qualification for the last 16.

Though in reality forced to do little between the sticks, Walker's goalkeeper cameo will no doubt go down in Man City folklore, with fans even heard chanting "England's number one" from the stands.

Speaking post-match, Walker seemed to admit he was hesitant to go in goal and hinted he has a new found appreciation for what the City keepers must do every week.

"I try and sometimes banter the keepers in training telling them to catch it and stuff but as I found out tonight sometimes have to take two touches," Walker told BT Sport post-match.

"All jokes aside we came here for a point or a victory. We knew it was going to be difficult because they play man to man, they're a good team and they're in the Champions League for a reason. So to come away from here with how the game ended with a draw is a good point."

Fellow defender Benjamin Mendy paid tribute to Walker post-match, perhaps a little relieved he was not forced to pull on the gloves himself.

"I say thank you Kyle, because it's not easy to take on the responsibility to be a goalkeeper and save the free-kick," Mendy said. "This is one game we're going to remember."

Guardiola's side are now five points clear at the top of Group C in the Champions League and face a crunch Premier League match on Sunday against Liverpool.