A Nigerian man has won the admiration of many people after he represented an unlettered man in court. 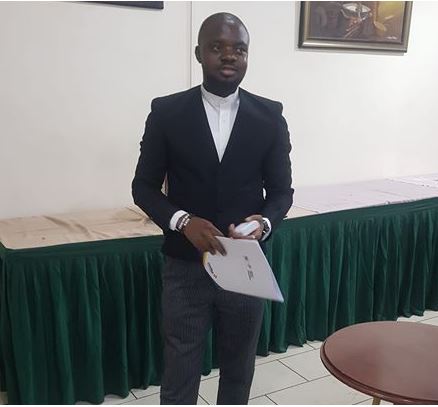 Eze Gab Chikwado, a Nigerian lawyer, is currently being praised online for the act of kindness he showed an unlettered man at the Federal High Court Abuja yesterday November 6th.

Read his story below: "When God remembers you!

"At the Federal High Court sitting in Abuja this morning, I had a civil matter. Got to Court but my lord was yet to sit. I rushed down to the canteen to add some oil. Before I and my colleague could enter Court had already started sitting.

"A very young man was standing trial for a drug related offence with a maximum punishment of 25 years. Though I wasn't in court when he took his plea but I noticed he wasn't represented. He equally pleaded guilty to the one count charge. Prosecution even went ahead to lead evidence in prove of their case.

"Shockingly, the Judge convicted him as charged. In all these, I had thought he had a lawyer. I was simply busy doing my thing. Nobody cared. Everywhere was as calm as the graveyard.

"Immediately he was convicted, my friend touched me and said that this guy has been convicted o, yet, no comment from any quarter. I raised my face, upon hearing my lord asking him if he wanted to say anything, he said no. Already, I couldn't hold myself, I quickly jumped up and pleaded with my lord to enter appearance for him for sentence hearing.

"Yes, I was not only the youngest in the court, I was the smallest. I had wanted someone to talk but no one did. I looked at this young man, he doesn't understand English at all. All that happened were interpreted for him.

"Immediately I applied to enter appearance for him all eyes were on me. Graciously, my lord obliged me and stood the matter down for some minutes. I collected the charge and called him outside. Since he only understands and speaks Hausa I called my colleague.

"I perused through the facts, asked him few questions which my friend interpreted to him. He also interpreted the answers to me too after which I entered the Court. I had already looked at the section of the NDLEA Act and found out the sentence is grievous.

"I entered an allocutus for him. In a twist of fate, the Judge was so touched that she asked me that I should not end at the allocutus stage. She went further to say I should take step to tell him the implication of the offence he committed. Being a drug offence countries of the world take it serious.

"All to the glory of God.

"In all of these, I never cared where he came from. I never cared anything but the fact that he is human and he needs help at that moment. He was left to his fate but God chose to provide help to him. It is the humanity in us that makes us to feel for others irrespective of colour, tribe or religion. You can be used too if you allow yourself.

"For this and many more I remain immeasurably grateful to God."