'7 Private Jets, 92 G-Wagons' - What Otedola Could Have Done With Historic Donation To IDPs


This is a list of some of the things that Otedola could have done with his historic donation to IDPs in the northeast. 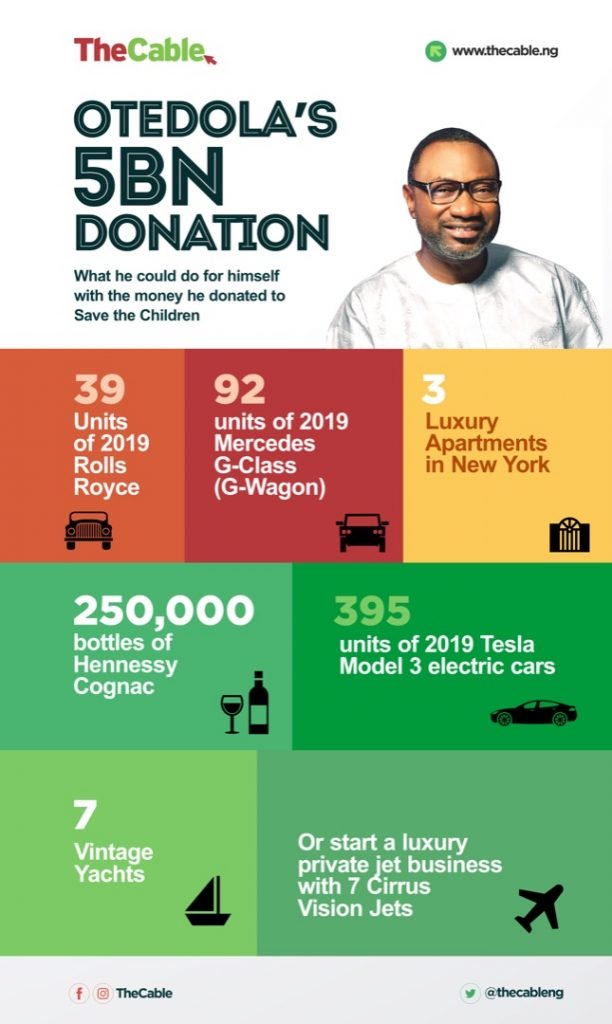 A few days after his 57th birthday, Femi Otedola, Nigerian multibillionaire and businessman, made history by donating N5 billion for the care of children facing extreme challenges as a result of Boko Haram insurgency in the northeast.

According to Vice-President Yemi Osinbajo, this is the largest donation to charity by a single individual in the nation’s history.

The donation was made to Save the Children, the 100-year United Kingdom-based charity, to support its intervention in about 16 states of the federation where the Charity organisation operates in Nigeria, reaching over 23 million children across the country.

Without running a foundation, Otedola is making a strong statement as one of the country’s biggest donors to worthy causes.

His second-biggest donation is his commitment to building and donating a faculty of engineering valued at N2 billion to the Augustine University in his hometown, Epe, Lagos state.

TheCable takes a look at what Otedola could have done with his N5 billion donation — if he was following in the footsteps of an average billionaire.

A LIFETIME OF CHAMPAGNE

How many bottles of Hennessy do you need to buy in a lifetime? 250,000? At one Hennessy per day, Otedola could have used the same money to by at least 684 years of champagne. 684 years is how many lifetimes?

While donating $50,000 to former Super Eagles Coach, Christian Chukwu, Otedola said: “In my circle of friends, many people spend up to N50 million to drink champagne and generally ‘enjoy’ life, but at the end of it all what happens? It passes out of their body as waste. For me therefore (and I also tell my friends) it is important to use such money to benefit others and put a smile on the faces of as many people as we can.”

According to Boat Internationational, it cost about N255,000,000 to buy a 1976 Ocean Romance Yacht off its vintage collection. With N5 billion, Otedola could have easily bought about 19 of these yachts. But most vintage yachts do not come in as many pairs. So most billionaires have to diversify their collections by buying different brands.

With N5 billion, the Nigerian businessman can buy at least seven of some of the finest yachts in the collection.

The 2019 Mercedes G-Class is the rave in town by some of the richest in Nigeria. It cost between $125,000 to $150,000. With N5 billion at your disposal, you can buy 92 units of this luxury vehicle, and perhaps have some change — depending on the model you settle for.

Think of this as a luxurious car business in a Benz-crazed Nigeria, but Otedola will decide that it was better to use these billions for the struggling in society, than serve to the orders of his class of rich businessmen in Nigeria.

7 PRIVATE JETS AND OTHER LUXURIES

In 2017, a famous bank chairman in Nigeria quit his active role in the bank to start a private jet business, which he considered his next challenge. Despite the initial clampdown under President Muhammadu Buhari on some of these luxury items, the business is expected to boast of a good number of jets and so heavy cash flow.

To attempt this business with N5 billion is also a possible way for Otedola to spend his money. Brand new Cirrus Vision Jet costs about N723 million. With N5 billion, Otedola could easily buy seven of these jets.

As a businessman in real estate, the former Forte Oil chairman could easily buy luxury apartments in any part of world, including one of the world’s most expensive cities, New York.

The same money could also buy 39 units of 2019 Rolls Royce, regarded as some of the most expensive luxury cars in the world today. It would be easy to become friends with Elon Musk, the billionaire Tesla CEO, by simply buying 395 units of fully electric 2019 Tesla Model 3, which costs a little over N12 million per unit.

Philanthropy makes up two percent of the United States gross democratic product (GDP). According to Bill Gates, this covers for what the government cannot do, and what the private sector is also not doing. He says philanthropy is important to the US economy.

For Nigeria, it remains unknown, how much of the GDP is made up of charitable donations, but with the likes of Otedola in the space, the numbers are definitely growing, and may soon be well-studied and measured in GDP reports.