Super Eagles striker, Victor Osimhen said he is hundred per cent ready to face Benin Republic, adding that he will try to score goals against the visitors. 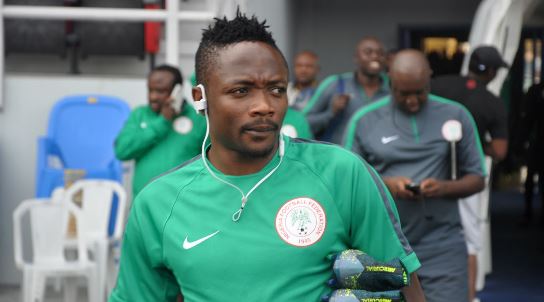 Super Eagles captain, Ahmed Musa has said that Gernot Rohr’s men will do everything possible to beat Benin Republic in Wednesday’s 2021 Africa Cup of Nations (AFCON) qualifier’s clash in Uyo.

The former Leicester City star, who missed Nigeria’s last two friendly matches against Ukraine and Brazil due to injury, said he was delighted to be back as he hopes to feature for the 2019 AFCON bronze winners against the Squirrels.

“I’m very happy to be back from injury. Over 2 months now, I’ve not played football but thank God, finally, I’m back, so I’m happy,” Musa was quoted by Soccernet as telling reporters at Super Eagles’ training camp in Uyo on Monday ahead of Nigeria’s clash with Benin on Wednesday.

“Any time any minute the coach wants me to play, I’m ready and ready to go.

“As you can see, we don’t have much time with the team, we’ve just had our first training session with the players.

“Tomorrow we will have the team together. So I know it’s a very difficult game but we know the task ahead of us, so we will have to do our best to win the first game (against Benin).”

Also speaking, Super Eagles striker, Victor Osimhen said he is hundred per cent ready to face Benin Republic, adding that he will try to score goals against the visitors.

“Of course I’ll try to get the goals for the team but I’m not the only striker that can score. We also have Samuel Chukwueze and Samuel Kalu and of course, our captain (Ahmed Musa) is back, so confidence in the camp is really high.

“So, we’re looking forward to the game. “It feels good to be back (in Nigeria). It’s home for us always and we are ready to give our best and make the fans happy.”

“We have been together for almost two years now and the coaches know the qualities of each of the players, so I think we will be ready.”

The kick-off time for the match is 5pm.