Parents of a little boy that was kidnapped inside a church in Ondo state have begged for help. 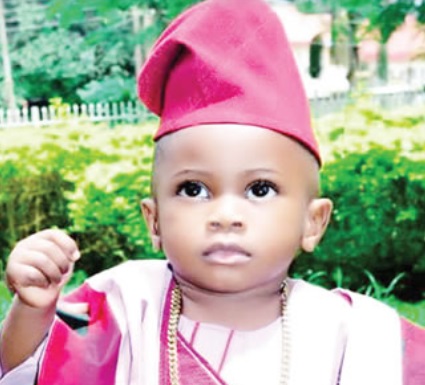 The little boy, Gold Kolawole
A one-year-old boy identified as Gold Kolawole has been kidnapped inside a church auditorium in Akure, the Ondo State capital.
It was gathered that Gold's mother, Mrs Modupe Kolawole, took him to the Sotitobire Miracle Centre located at Osinle area of Akure, the state capital on Sunday Novermber 10th for worship.  She took her son to the children's church and registered him as the church rules demanded.
Immediately after service, she went to pick up her child and couldn't find him. Upon inquiry, she was told he had left, as someone must have come to pick him up. Efforts to locate him since then has proved abortive.
Mrs Kolawole says the matter has since been reported to the B division police station, Oke Aro as well as anti-kidnapping office at Alagbaka in Akure. She said nobody has been arrested or interrogated by police.
Confirming the incident, the state police comand spokesperson, Femi Joseph, a Superintendent of Police (SP), said efforts are being made to rescue the boy.
Top Stories