Journalists, Others Allegedly Barred As 'Secret Trial' Of Jalingo Begins In Calabar


Journalists and other persons have been barred as the secret trial of Agba Jalingo begins in Calabar. 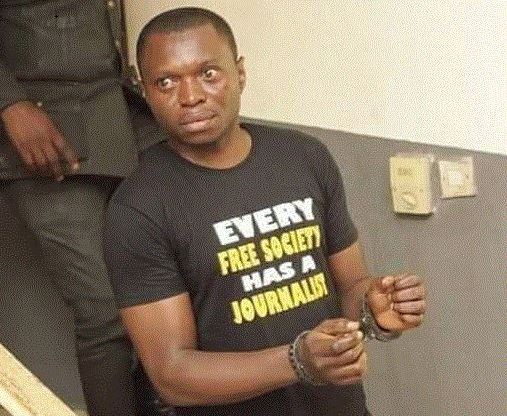 According to TheGuardian, the “secret trial” of a journalist and human rights activist, Agba Jalingo, began yesterday in Calabar with journalists, lawyers and others allegedly locked out.

The publisher, who is believed to be incarcerated by Governor Ben Ayade, is facing charges bordering on conspiracy, terrorism, treasonable felony and attempt to topple the Cross River State Government.

Court officials and policemen reportedly chased out journalists filming and photographing what was believed to be like a circus at the Federal High Court, Calabar.

Strangely, the three lawyers in the defence team were reportedly asked out of the courtroom alongside prison officials.

Earlier yesterday, the court, presided over by Justice Simon Amobeda, dismissed an application by Jalingo’s counsel to modify his order of October 23, 2019, which granted leave for the prosecution to “mask its witnesses.”

In that ruling, the judge had also ordered that the public and the press would not be allowed during the cross-examination of the prosecution witnesses.

The case was supposedly stood down until noon when Justice Amobeda resumed sitting at about 1:34 p.m. with the prosecution counsel, Dennis Tarhemba; Jalingo, two court clerks and the judge’s police orderlies.

Before the court resumed sitting, security agents allegedly restrained all, including correctional officers, to outside the courtroom.

After the ruling, Jalingo’s counsel, Adeyinka Olumide-Fusika, a Senior Advocate of Nigeria (SAN), had said his submissions were “mis-characterised,” adding that he was not confident that a “secret trial will bring justice especially as there will be no independent recording of court proceedings.”

Jalingo had in July this year published an article where he demanded the Cross River State Government to clarify the N500 million approved and released for the floating of the Cross River Microfinance Bank.