PVCs Now Being Sold For N500 Ahead Of Bayelsa Poll - Report


A new report has revealed that voters in Bayelsa state are selling their PVCs for a mere N500. 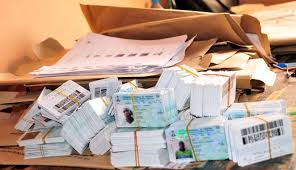 PVCs
While it still remains sketchy if the governorship election would hold as planned in Bayelsa State on Saturday, Watching the Vote Project of YIAGA AFRICA, Thursday accused electorate in the state of selling their Permanent Voters Card (PVC) for cash.
The Not-for-Profit election monitoring group in Bayelsa described PVC trading as a predominant electoral offense recorded just two days to the election.
“The buying and selling of PVCs was one of the predominant election malpractices recorded in the pre-election environment. The findings from all four observation reports revealed that PVCs were purchased for N500,” the report stated.
Implication of the trend, the observers noted, could undermine the credibility of the electioneering process by manipulating the procedures of accreditation and voting.
In addition, the group highlighted the likelihood of selected voters being disenfranchised due to flooding in riverine communities. The affected communities include Southern Ijaw, Kolokuma/Opokuma, Ekeremor, Sagbama, and Yenagoa Local Government Areas.
While describing flooding as a major problem to the planned poll, YIAGA expressed concerns on poor documentation, revealing where voters in flooded communities are located or relocated YAIGA noted that this development before the polls would greatly hamper the process of democracy.
Other issues of concern on the Bayelsa Governorship election include high-security threats, recruitment of thugs and arms stockpiling for which locations like Brass, Southern Ijaw, Sagbama and Yenagoa have been flagged are factors that might lead to low voter’s participation.
“In addition to this, is the threat of community conflicts that may impact on the election, especially with the recent incident in Ekeremor LGA where a clash over community election led to a major crisis with houses burnt.
“The recent violent clashes between PDP and APC supporters resulting in the death of three citizens in Nembe LGA posed an additional challenge.”
Earlier studies by YIAGA AFRICA revealed tendencies of violence during the poll some of which include arms stockpiling, thuggery among others.
Culled from icirnigeria
Top Stories