It was a message of courage, defiance and hope for both his teeming supporters and the Nigerian downtrodden people. 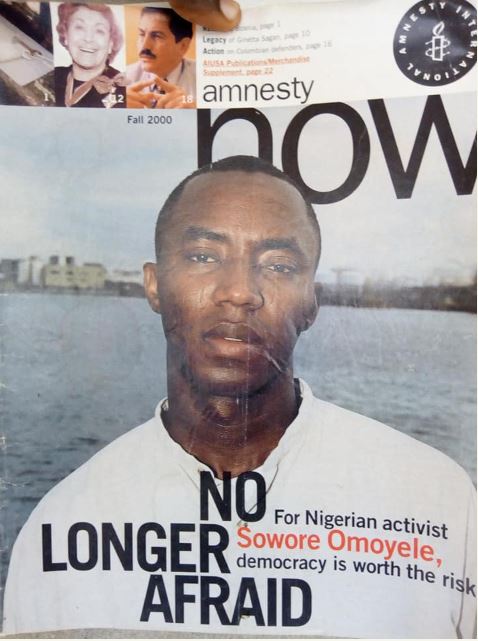 Detained social activist, publisher and politician, Omoyele Sowore, has spoken out from the custody of the State Security Service, telling PREMIUM TIMES he is being held as part of a grand scheme by the Buhari administration to shut down Nigeria’s civic space.

Mr Sowore called a PREMIUM TIMES’ reporter on Thursday afternoon, in a rare move to directly send out a message to the public. It was a message of courage, defiance and hope for both his teeming supporters and the Nigerian downtrodden people.

The Sahara Reporters’ publisher said he would remain undeterred by the controversial tactics of the current government, which have seen him held in perpetual custody against the order of a federal judge.

Mr Sowore, a former student union activist who confronted military regimes and went to jail for it, was arrested in August in connection with his #RevolutionNow campaign — a series of nationwide protests he had planned with other activists to demand a better Nigeria.

The protests were planned to commence on August 5 across 21 towns and cities, with public awareness escalating as the day drew closer.

But suddenly on August 3, armed SSS officers broke into an apartment Mr Sowore was occupying with some of his closest associates in Lagos. He was taken away in the midnight raid that was captured by security cameras. The arrest elicited outrage from Nigerians, with many slamming the SSS’ brutal tactics as yet another state-sponsored violence against unarmed citizens.

Members of the movement also warned that Mr Sowore’s detention — which they deemed illegal and unwarranted — would bolster rather than dampen a wave of resistance to decades of bad governance that many believed had worsened under President Muhammadu Buhari.


Speaking with PREMIUM TIMES from custody, Mr Sowore said the demand for his sureties was an attempt to intimidate them into pulling out.

“Their aim is to intimidate my sureties by subjecting them to undue maltreatment,” Mr Sowore said. “It is part of a grand plot to hold me hostage because they have failed to find anything illegal to pin on me.”

“But we know what they want to do and we will not allow it to happen,” he added.

Although the SSS has repeatedly asserted its respect for the Nigerian judicial and the rule of law in general, the agency has a history of repression, violation of citizens’ rights and disobedience of court decisions.

SSS was the agency at the heart of most allegations of attacks on Nigerians during the brutal military eras of Ibrahim Babangida and Sani Abacha. Several Nigerians were jailed, physically attacked or killed as Mr Abacha moved to clear all obstacles to his authoritarian regime.

Despite attempts to reform the agency as Nigeria attained democracy in 1999, critics say the SSS, founded in 1986, has remained wedded to its brutal and anti-democratic past.


Mr Sowore lamented that he had “not seen sunshine since he was detained except when taken to court.” Only three people have been allowed to see him since August 3, which includes his lawyers and the person responsible for his feeding.

Even though Mr Sowore said he cannot wait to reunite with his associates and loved ones, he said he had come to a fresh realisation that the SSS would continue to disregard court pronouncements and would not release him anytime soon.

“Last night, they gave us phones and cable TV,” Mr Sowore said. “This indicates that they have no intention of complying with court orders to release me anytime soon.’’

Mr Sowore said he will continue to fight for the downtrodden, and wanted the world to know that the Buhari administration has been stifling civil liberties in Nigeria.

“The world should know that I remain unbroken and in high spirits,” Mr Sowore said. “I will continue to fight for the Nigerian people, ensure that the people are not shortchanged and corruption is driven underground.”

“I will continue to stand up for the downtrodden,” he said.

Mr Sowore said all those who support him should not be discouraged because the masses will prevail in the battle against anti-democratic forces.

“The ultimate mission is to intimidate all critical voices and shut down the nation’s civic space,” Mr Sowore said. “But this will not happen and we shall overcome.”