The statement explained that regrettably, one soldier paid the supreme price while 4 other soldiers were wounded in action. 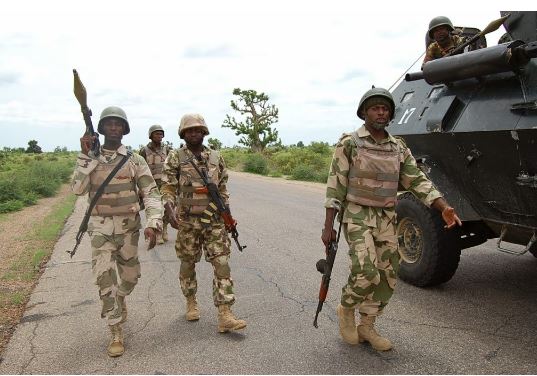 Media Coordinator, Nigerian Army Operations, Colonel Aminu Iliyasu, in a statement said that on 13th November 2019 while the insurgents were trying to infiltrate the location of 64/98 Task Force Battalions, operatives deployed at Mallam Fotori, outgunned and decimated them, forcing them to withdraw in disarray.

The statement explained, “The insurgents attacked the location with Person Borne Improvised Explosive Devices, Gun Trucks, Rocket Propelled Grenades (RPG) and other small arms. However, the dogged troops responded swiftly, outgunning and decimating the cowardly criminal insurgents and forcing them to withdraw in disarray.

It was apparent that most of the criminal Boko Haram insurgents escaped with serious gunshot wounds as traces of blood were seen along their escape route.

“At the end of the encounter, 3 Boko Haram criminals were neutralized, 2 of their Gun Trucks were destroyed while 3 AK 47 Rifles and one Anti-Aircraft Gun was also captured from the insurgents.”

The statement explained that regrettably, one soldier paid the supreme price while 4 other soldiers were wounded in action. “The wounded soldiers are currently in a military medical facility and are positively responding to treatment,” the statement said.

Colonel Aminu Iliyasu said, following the successful repelling of the insurgents’ attack, troops mobilized and conducted a mop-up operation in the early hours of 14th November 2019, adding that during the mop-up operation, 13 additional Boko Haram bodies were discovered along the criminals’ withdrawal route.

The Theatre Commander, Operation LAFIYA DOLE, Maj Gen Olusegun Adeniyi, on behalf of the Chief of Army Staff, Lt Gen Tukur Yusufu Buratai, conveys his message of encouragement to the troops for a job well done.

He further admonishes them to continue mounting pressure on the insurgents until they are forced to total submission.