A General Overseer involved in the selling of unborn babies in Delta state has made some confessions. 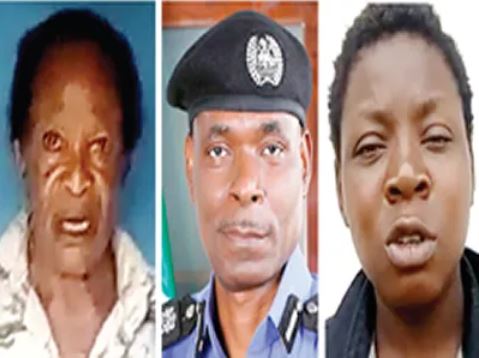 According to a report by NewTelegraph, General Overseer of Liberation Ministry, Pastor Sunday Chinedu (33), has told operatives of the Inspector-General of Police (IG) Special Intelligence Response Team (IRT) how he became part of the syndicate selling unborn babies in Delta State.

Chinedu was arrested along with Madam Isioma Uko, Mr. Adagbo Samuel aka Baba, a Chief Medical Director and owner of Ndu Hospital and Mortuary located in Delta State. Others are Vera Emenike aka Vivian, Monday Joy, Faith Yusuf Desmond and Friday, a panel beater.

The syndicate was busted after IRT operatives, led by a Deputy Commissioner of Police (DCP), Abba Kyari, received information on the illegal activities going in the hospital and embarked on surveillance that ran into weeks. When the operatives were sure that their information was correct, they stormed the hospital.

A police source said: “The syndicate is using the hospital to engage in human trafficking and operation of illegal orphanage, otherwise known as baby factory. The syndicate gets girls, mostly underage, pregnant while the girls would be lured to the hospital, which has been turned to an illegal orphanage. The syndicate harvests babies when their young mothers are just six months gone. Once the babies are brought out, they are put in incubators and then sold when they are nine months old.”

Chinedu said after he struggled to finish his secondary school, he could not proceed to the university owing to the poor financial status of his family.

He said: “I decided to go into bricklaying, which I did to support myself and my family before I met the late Austine Odinma, who was a pastor at Christ Living Faith Church. He asked me to stay with him, so that I will be close to God. I was with him but he could not teach me the work of God or the art of being a pastor before he died. After his death, his wife sent us out of his house; that was before I got married. I used to ride a motorcycle before I founded my own church.

“Police arrested me because I did business with Samuel, who we call Baba. The business involved buying of babies. I brought a girl from Edo State to Samuel. The girl is a prostitute, who got pregnant and wanted to get rid of it. The pregnancy was six months gone when she came to my church to ask if I knew where abortion could be carried out. I got to know her during my commercial cycling days.

“While she was talking to me and crying, a woman walked into my church. She asked why the girl was crying and I explained. She told me she would give me a man’s number, that the man was a doctor. I collected the man’s number, called him, and he directed me to his place.

“When we got there, he gave her two options; either to abort the foetus or sell the baby after birth. The lady chose the second option. When the lady gave birth, the doctor called and showed me N300,000. He took N50,000, which he said was his share and then gave me N30,000, while the rest of the money was given to the lady.

“Three months later, the lady brought her friend to Baba for the same solution.”

According to Chinedu, another pregnant lady he took to Samuel is called Christabel. After the operation, money exchanged hands. Everyone involved in the transaction collecting money, including him and Christabel.

He said: “The first time Christabel came to meet me for help was on June 17, 2015. On June 28, 2015, Christabel returned with one of her friends. The friend came with a young man, whom she claimed was her husband. We all went to Samuel’s house on getting there he gave us an outpatient card for the lady. She later delivered a baby girl. Samuel repeated the same method of which he took N50,000, gave me N30,000 and handed over the balance to the lady. Another time, my phone rang and it was a lady. She told me that she got my phone number from Christabel. She told me that Christabel had travelled out of Nigeria.  I took her to Samuel’s house and on getting there; the man told us that the pregnancy was not matured enough, that the lady would remain with him before he could deliver her of her baby.

“After a month and two weeks, I called Samuel and asked him how things were going over there, he then told me that the lady had delivered and gone back. I asked him why they didn’t give me my own share of the money, Samuel told me that he had given the lady all the money, so I forgot about it. The total children Samuel bought through me were three.

“I’m a pastor, but my grandfather was a native doctor before he died. When my grandfather was alive, he used to send me to the bush to get him some herbs which he used for ritual. When I got my own church, I started using those herbs and added candle and anointing oil to solve people’s problems.”

Another alleged member of the syndicate is Joy, said to have sold her baby for N50,000.

Joy said she was arrested because she sold my six months old baby.

She said: “The person that assisted me with the transaction is Dr. Samuel. I was directed to Samuel by Favour (Christabel), but she had since travelled out.

“I was arrested because I sold a baby. I went to a woman called Vivian who lives at Agbor Obi in Delta State. One Favour whose surname was not known to me directed me to Samuel to go and abort or sell my baby. I went to Agbor and one of the nurses checked me and said that my pregnancy was six months. She said she would pay me N50,000. I told her that the money was too small, and she said that was what she could pay. She then gave me injection to induce labour.

“After the injection, the baby came out and it was a baby boy. She paid me the money and I rested before I returned to my house. The place I was delivered of the baby was one room with small mattress. The woman told me that she was running an orphanage in that place.

“I left and never asked if the baby survived or not. I know that it is an offence to sell a child, but I was not doing it deliberately, I did it under a spell. I sold a baby only once. The money made from the business cannot be used for something good. If the police can help me to recover the baby, and he is in good health, I will collect it and take care of my baby as a mother. Now I realised that what I was doing wasn’t good and I have decided to beg for forgiveness from God.”

Joy disclosed that there was a lady, who used to supply Samuel pregnant girls and another supplier of pregnant ladies was Chinedu. She claimed that most of the pregnant ladies that the pastor brought to Samuel were members of his church.

She said: “There is a particular lady who used to come from Ekpoma in Edo State. She usually brings the pregnant girls to the doctor and only when they were at the point of delivery. Most times, the girls would have been delivered of her baby before they got to the doctor. There was a time three people came to collect babies. The pastor brings his church members. According to what I heard, he also does spiritual works. No, it is only once I collected the money. The second baby was mine; I didn’t sell the baby because I had a miscarriage. The first baby I sold was for N50,000.”

Joy, who said that she didn’t live with her parents, explained that she lived with Nkiruka’s family, who became like a sister to her.

She said: “It was Nkiruka’s parents that trained me. I knew them when I was young and I took them as my family. My dad is late, but I heard my mother is in Lagos. My mother and I had issues; I was angry with her because she caused all the problems I’m going through today. She did not treat me well as a child that was the reason I ran to Nkiruka’s house. And throughout my stay with them, they never treated badly.”

Another suspect is Faith Desmond, who said that in April 2019, she travelled to her friend’s house, Charity, living in Asaba, Delta State, where she first met Joy.

She recalled that Joy asked her if she was married and she said no. Joy further asked if she was pregnant, to which she replied yes.

Desmond said: “Joy asked me where my boyfriend lived, I said Benin.  She then collected my phone number and later invited me to the village in Benin. When I got there, I met Samuel, who everyone calls Baba. After the introduction, Baba asked me how many months was my pregnancy.”

Desmond said that after she was arrested by the police, Joy told her not to implicate Samuel.

She said: “Baba told Joy to tell me if any person asked about me, I should tell them that I was Baba’s sister-in-law. I don’t have any relationship with Samuel. I was not even aware that Samuel was into selling of babies or was running a baby factory. I had a baby girl before. My first husband stays in Abuja, but I do not know his house. My daughter is with my sister in Plateau State.  I never knew that Samuel even had a mortuary, but I know that he normally says that he has a clinic. I have never sold any body. It was at the police station that I got to know that Joy has been selling babies before. Joy confessed before us that she has sold babies before to Samuel, that he paid her N50,000 in Benin. It was also when we got to the station that I knew he had an ambulance inside his compound.”

Mrs. Isioma, a nurse, lives at Oweriorubur. She is described as an agent of buyers. She is the one who carries the baby to unknown persons and sells them.