Soyinka stated that with the proposed penalty for hate speech, the national assembly is psyching its ranks to pronounce themselves affiliates of inhuman aberrations. 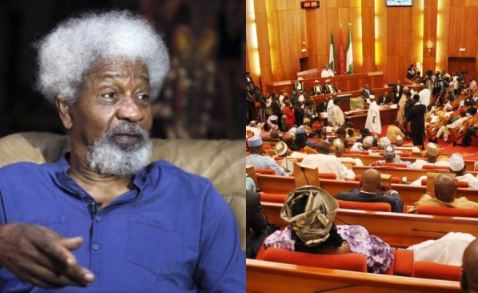 Prof Wole Soyinka has written a letter addressed to the senate over the introduction of the bill on hate speech which recently scaled its first reading.

The Nobel Laureate who wondered why killing should be used to curb hate speech, stated that the motives are spectacularly dubious and aimed at silencing the voices of criticism.

Soyinka stated that with the proposed penalty for hate speech, the national assembly is psyching its ranks to pronounce themselves affiliates of inhuman aberrations.

I hope you will excuse me for distracting you from your onerous duties, but I am a current sufferer – and I am not alone – from a persistent nightmare. That affliction has been induced by your most recent approach to addressing an acknowledged problem that affects, not only Nigerians, but the entire global community. The nightmare consists of the fear of waking up one morning to discover that one’s name has been cited among those helpless victims on behalf of whom a repellent legislation is about to be enacted.

?The likelihood in my case is especially acute. Yes, indeed, it is no Fake News that I have denounced the purveyors of public lies and hate material as the very scum of the earth. I have called them names that come close to enrolling me among the very reprobates we all so fervently denounce. From Abuja, through Paris, London, Sochi, Dar es Salaam, Chandrigah, etc. etc., I have utilized every availableplatform to highlight their perverse mentality and call for concerted action against their hyper-activism against humanity in general. I have singled out the Nigerian species of this criminal pursuit as an especially virulent breed, as a subhuman aberration without conscience, incapable of remorse, sustained by abnormal reserves of sadism. I have closed down dozens of fake sites instituted over my name, and set in motion mechanisms for the pursuit of those who steal my identity, even where the content is quite harmless, even positive. Only recently, in Paris, I proposed that judicial mitigation under the recognition of crime passionnel should be considered forvictims of Fake News who ‘lose control’ on physically encountering their violators. As you may have discerned so far, I again, and unapologetically, exploit this very development to reiterate my detestation and contempt for such pestilences that plague our humanity.

?However, dear legislators, consider more deeply the path on which you have chosen to embark. I invite you to reflect quite objectively on the company into which you are about to throw yourselves, and the consequences for the very nation you represent – including its social psyche. You are about to corrupt youthful impression, to join the brigade of closet psychopaths for whom the only solution to any social malaise from the trite to the profoundly affective is – Kill! Is this what humanity and society are all about?

You are psyching up your ranks to pronounce yourselves affiliates of inhuman aberrations such as Boko Haram, Isis (Da’esh), al Shabbab , nomadic cow herders etc. etc. for whom killing is the only response for real or imagined wrongs, perceptions of entitlement and/or deprivation, sense of righteousness and generally – concept of a thoroughly sanitized community of mortals. You are sending out applications to join the ranks of those inadequate males who believe that the only cure for adultery is to bury a woman up to her neck in earth and reduce her head to a pulp under a rain of stones. You affirm yourselves – not for the first time, alas! –allies of those who believe that death is the appropriate cure for that physiological conditioning which, through no fault of theirs, attract them to others of the same sex. You pronounce yourselves clones of demented rulers like Yahayah Jahmeh of Gambia who preached that we all cut off the heads of homosexuals and poison alleged witches -– and so on and on down a dismal list of silent, instinctive killers who have somehow managed to manipulate themselves into the corridors of ‘legitimatized’ — or illicit recesses of – Power and Force.

By the way, are you aware that a school of thought passionately believes that thieves such as Yahayah Jahmeh, formerly of Gambia, Omar Bashir of the Sudan etc in company of numerous members of African leadership elite, including this very Nigerian society, deserve no less than the death penalty for pilfering public resources, and on a scale that continues to stagger even the most inured in this nation? Do you really, as presumably analytical minds, believe that a facile and final recourse to the gallows or a fusillade of bullets at the stake, is the sole remedy to the phenomenon of the diffuse classifications possible under the abuse of communication and the sowing of hate among people? How precise is the definition of ‘hate’ when it becomes a yardstick for the extinction of even one human life? Haunting,hopefully, our collective conscience as a nation, even till today, is recollection of a clique of social army reformers who instituted, and carried out the execution citizens under a retroactive law. Yet others wiped out entire communities as collective punishment for the loss of members of their elite class, the military. And surely it is too soon to dismiss memory of the mass decimation of a religious group, theShi’ites, for obstructing the passage of a motorcade of that same elite class. These are classic instances of murder, albeit under the immunity of power legitimation.

Your motivations are also spectacularly dubious. Silencing the voices of criticism is a perennial preoccupation of power, but we know that a far more penetrative form of death, spelling the end of social vitality and relevance is incurred when human voices are silenced. Try and imagine how many “deserved” executions would be taking place in this nation right now – beginning with nearly all of you in the exalted homes of legislation – if Boko Haram had succeeded in subjugating this nation under its creed. Well, do not even bother with imagination, which is not as common a faculty as we tend to assume – simply check with neighbouring Mali how many, convicted of crimes against faith, Mr. Answar Dine eliminated during his brief sway in northern Mali. Or remain within this nation itself — check the statistics of death inflicted from indiscriminate bombings of the thriving concourses of humanity – schools, markets, motor parks, media houses, churches, mosques, shrines by believers in the doctrine of death as divine solution to the very crime of existence outside their narrow and perverted set of beliefs. Consider the fate of Uganda if Joseph Kony had indeed succeeded in his mission of converting Ugandans to his doctrine of – Salvation or Death!

These are not imaginary scenarios. That quick but facile option – killing – has become the current emblem of this very nation, effectively replacing the green-white-green!Something has collapsed. The carefully calibrated structures of fellow feeling, supposedly inculcated from infancy, lie in ruins. Life is now held cheap, casual, and trite. Students kill for the thrill of it, and for assertion of cultic supremacy. Kidnappers collect ransom yet kill. They kill even intermediary couriers. Fetishists kill in pursuit of illusions of instant wealth. Others, highly placed, kill for political office, and yet others to cover up criminalities by the deployment of killers. You cannot claim ignorance that there have been identified, over the past few decades, consortiums of killers who actually advertise their trade in select circles and canvass for clients. Your businessmen – and women – have used them. So have politicians.

And now, you wish to add, to this culture of rampaging morbidity, the state empowered deaths of those dregs of society who titillate themselves with corrosive narratives from diseased minds, and boost their meaningless lives with the degradation of others? Are they even worth the cost of the hangman’s noose? No. True, governance has a responsibility to protect its citizens, but social malefactors must be fought and neutralized through far more painstaking methods. Reformed if possible, exposed and publicly humiliated,punished and compelled to make restitution where their actions have caused pain, anguish and destruction. That option, we know, is the more arduous path, but then, where did you obtain the notion that you were elected to occupy cushy, stress-free armchairs?

?When a section of this national community wanted to execute a lady called Safiyat for alleged adultery some years ago – and through the singularly revolting means of stoning to death — the nation rose above religious partisanship inrepudiation of this barbaric trivialization of human life. We continue to rail against the solution of death as penalty against those whose sexual orientation is different from ours, and thereby offends the sensibilities of others. I await persuasion, offered through objective, not emotive arguments, that this new extension of the homicidal imperative is fundamentally different from those other globally repudiated candidates for the killing route to social sanitation.

For now, may I passionately plead with you to consider that the coarsening and debasement of youth sensibility – already too far gone – through the trivialization of life – is a spectre that may return to haunt you if coming generations are taught that it is “cool to kill”. Remember that example, especially by leadership, is a hundred times more explicit and enduring than the mere propagation of any counter-doctrine. Do not embrace the awful responsibility of impressing homicide as a way of life on the ethical template of coming generations. The chickens have a way of coming home to roost. I may be wrong of course, but their droppings already foul the common air we all breathe. Just take a deep breath, look around you, and re-consider.